By xNickBaranx July 11, 2015
'It's Time!' is the scenario that comes in the Beta Rules and will also appear in the final rule book. It sets the scene for a break attempt as the miners have been pushed too hard for too long under abysmal work conditions. It is also meant to set up a small introductory skirmish, allowing you to play with up to 8 models on a tiny, 8"x20" play area. Today I'm going to talk about the construction of that play area. 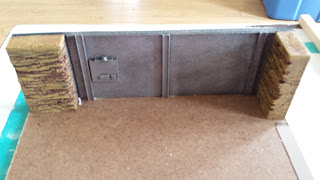 Months ago I constructed this piece from foamcore, Plastruct girders, a piece of textured cardstock, and some pink foam. The light on top of the box that you can barely make out was shaved of a GW Cities of Death piece. I finally glued it in place on an 8"x10" piece of 1/8" masonite board. At the "mouth" of the entrance I glued down a 4" rectangular piece of Plastruct tread plate. 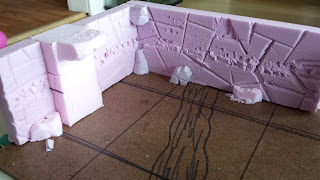 The shape of these board sections is supposed to be more jagged and weird, like they are still currently mining it out, but it still needed to be a playable space. It also needed to look more dangerous, like there is a threat of falling rock, so I shaped some rock sections and glued them up high. Here are some other progress shots: 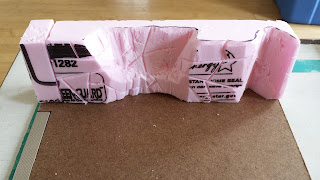 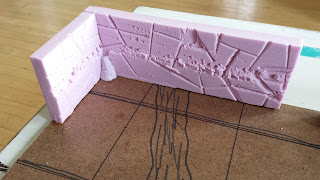 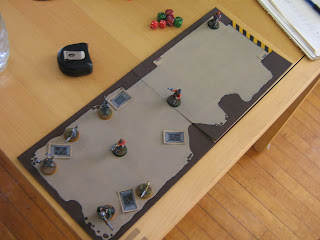 The last picture was the original concept board that I created almost a year and a half ago now for 'It's Time'. Here you can see more of the pieces being glued in and it start to take shape. 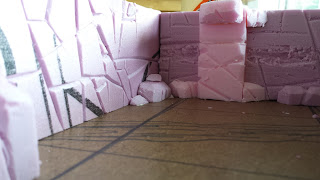 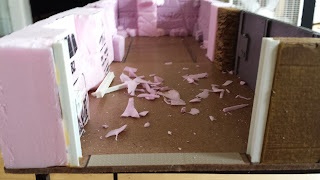 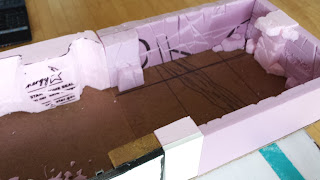 You can see the structure is filling in. Now we're going to fast forward and skip all of those in between steps you know from the first several Making Mine Scenery installments. 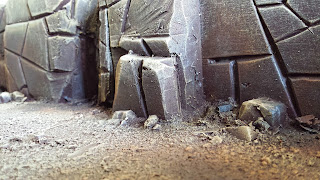 If you look at the last pink foam pic, this that same section from a different angle. This photo was taken before weathering powders were added. 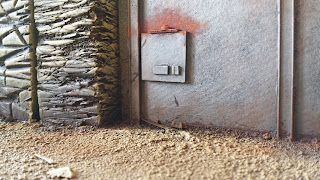 The OSL glow I used for the alarm isn't great, but I can always go back and mess with it later. 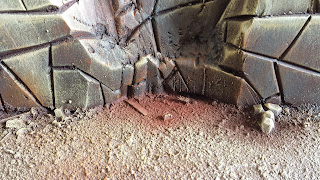 Weathering powders Forgeworld Medium Earth and Aged Rust were added here and there to create visual interest, particularly along the corners where the earthen floor meets the rough rock wall. 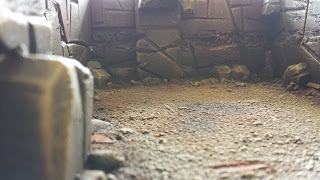 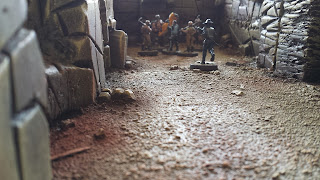 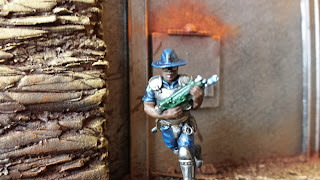 Prod Gunner, Lamal Tulson, has sounded the alarm and is rushing to intervene! 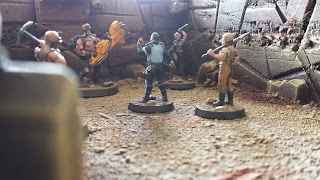 Nells is sneaking up behind Officer Hickley, his knife tucked behind his back. The Surveillance Drone capturing this moment is clearly moving at high speeds because everything is blurry. Can Officer Tulson save Officer Hickley? You'll have to play the scenario yourselves to find out!

Are these board sections done? Not quite. I'd like to add some signs, make some ore carts, and add a door that can raise and lower just like the scenario dictates (I made one of these in Making Mine Scenery Part VII). Still, it's almost there.

Thanks for reading hobby friends!
-Nick

Want to see all the stages? Start at Part I!