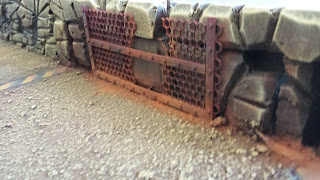 It's been a while since I've really gotten stuck into doing some work on my mines. Over the last couple of weeks our beloved pitbull, Ian Mackaynine, has had 3 surgeries. He had a growth removed from his leg, but then he tore out one of his sutures running around the house. For surgery number two they tried a less invasive way of sealing it back up with these weird piercings and a web of sutures that needed to be tighten daily at the vet's office. His leg was just too muscular for any of that nonsense and that surgery completely failed to hold his skin together. Yesterday, they did a whole bunch of cutting and stitching to loosen up his skin and get it all back together. His hind leg was described by one friend as "Frankenbutt" and that pretty much nails what it looks like right now. He's a tough little guy so he's doing okay but I've had to be the dog nanny to keep him on the mend. Honestly, I'd be devastated if I couldn't be there for him so I don't want to make that sound like I begrudge it.

There have been periods here and there where he's been heavily sedated and I'm just hanging out with him, keeping an eye on him. When I can I've taken a deep breath here and there to clear my head. I decided to put myself back into some scenery because it always relaxes me. Which it just so happens that right before this string of surgeries and endless vet visits a care package arrived from Horizon 3D containing a myriad of bitz. The ones I had an immediate plan for were their rivet strips and hex sheets. I had been planning on using plastruct I-beams and window screen to shore up sections of crumbling rock wall and create some added visual interest, but then these bitz arrived on my doorstep.


The hex sheets come in approximately 2"x4" lengths, perfect for my mines. The rivet strips are just over 8" long. These bitz are printed right off of a 3D printer so they don't have the smooth finish. Don't expect them to have the polish of resin or the ultra-professional grade 3D printers used to run off the print prototypes we use for our miniature line. However, for these sort of terrain applications they look great and are pretty easy to work with. It should be noted that the hex sheets don't have much flex before they crack. Don't expect to wrap them around toilet tubes or anything like that, but as fencing or flooring it adds a top notch layer of detail. 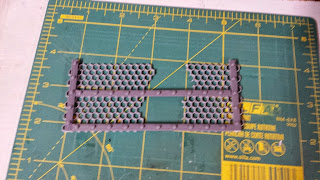 Here I took a couple sections of hex sheet and framed it in with some rivet strips keeping it roughly 4" long. 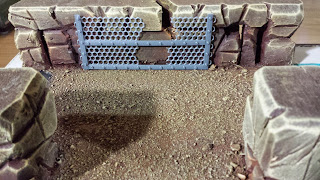 I roughly put the missing section of fence where there might be water leaking through the crack. It's also where equipment might be navigating the turn and hitting the rusty grating. It just felt like the right spot for a little bit of extra support or protection from falling debris. 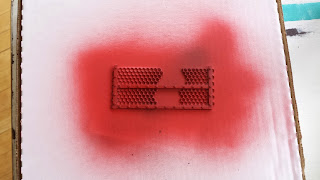 I decided to prime and paint it to see how it would look painted up but I was out of Chaos Black Primer. I knew it was going to be rusty so I shrugged my shoulders, grabbed the open can of Mephiston Red I had, and gave it a quick spray on a pizza box (the pizza was delicious). 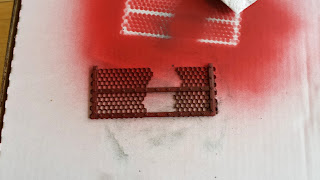 The red fence was given a hasty drybrush of Citadel Warplock Bronze leaving some Citadel Mephiston Red exposed. 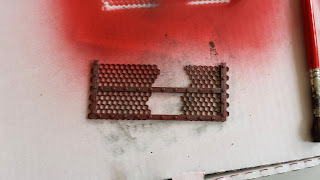 Then I gave it an even hastier drybrush of Citadel Leadbelcher. 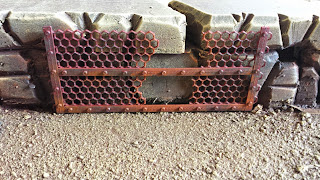 Finally I gaven it several stippled applications of Citadel Ryza Rust focusing on the bottom and around the gap in the fence. 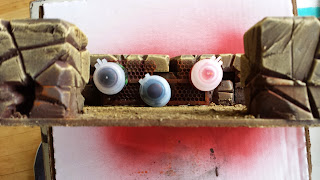 Next I wanted to glue it in place. CA glue/superglue would eat into the foam so I used wood glue. I put my pots of paint on it to help press it to the foam wall. After the wood glue dried it was visible at the bottom of the fencing so I stained it brown with some Citadel Agrax Earthshade. When it dried I used some Forgeworld Aged Rust and Light Rust weathering powders. 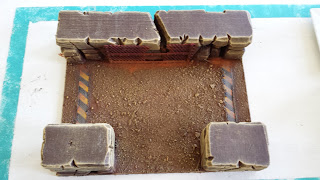 Finally here is the completed piece - my first "T" section. I think the Horizon 3D bitz definitely add a little pizzaz with half the work of what I would normally go through hand gluing rivets and trying to glue plastruct to floppy screen. I hear if you type BROKENCONTRACT as your discount code Horizon 3D will give you 10% off. Go check out the site and give it a try. :)

Thanks for reading and check out the other parts of the series!
-Nick