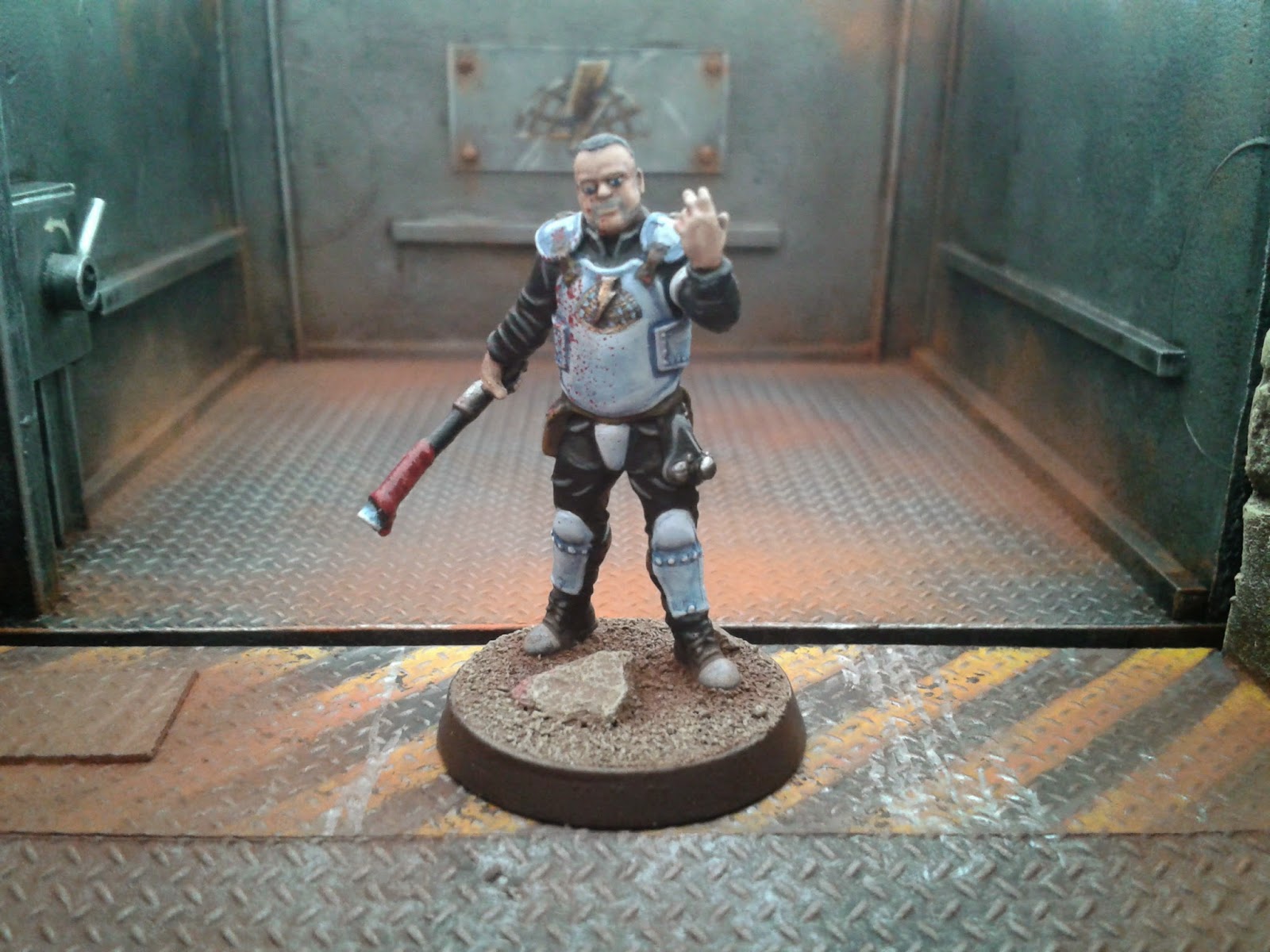 Come with Officer Hickley and I my friends, and I will give you a tour of "where we are at" with the mine board I've been working on. Officer Hickley was the very first commissioned piece of concept art I received from John "Geng" Gendall, and one year later he is the very first full painted Broken Contract miniature. He's not my best work but its a proud moment none the less. 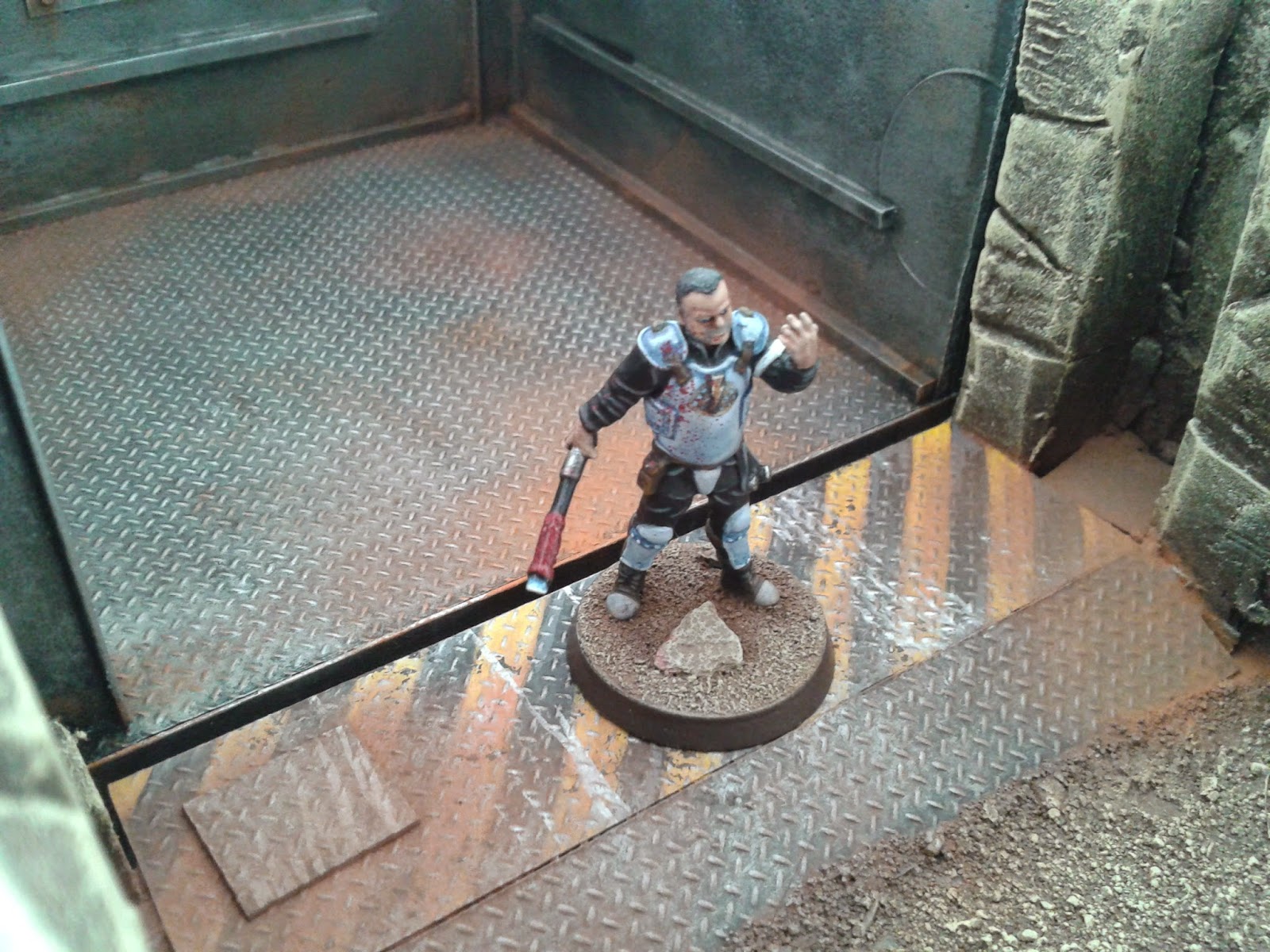 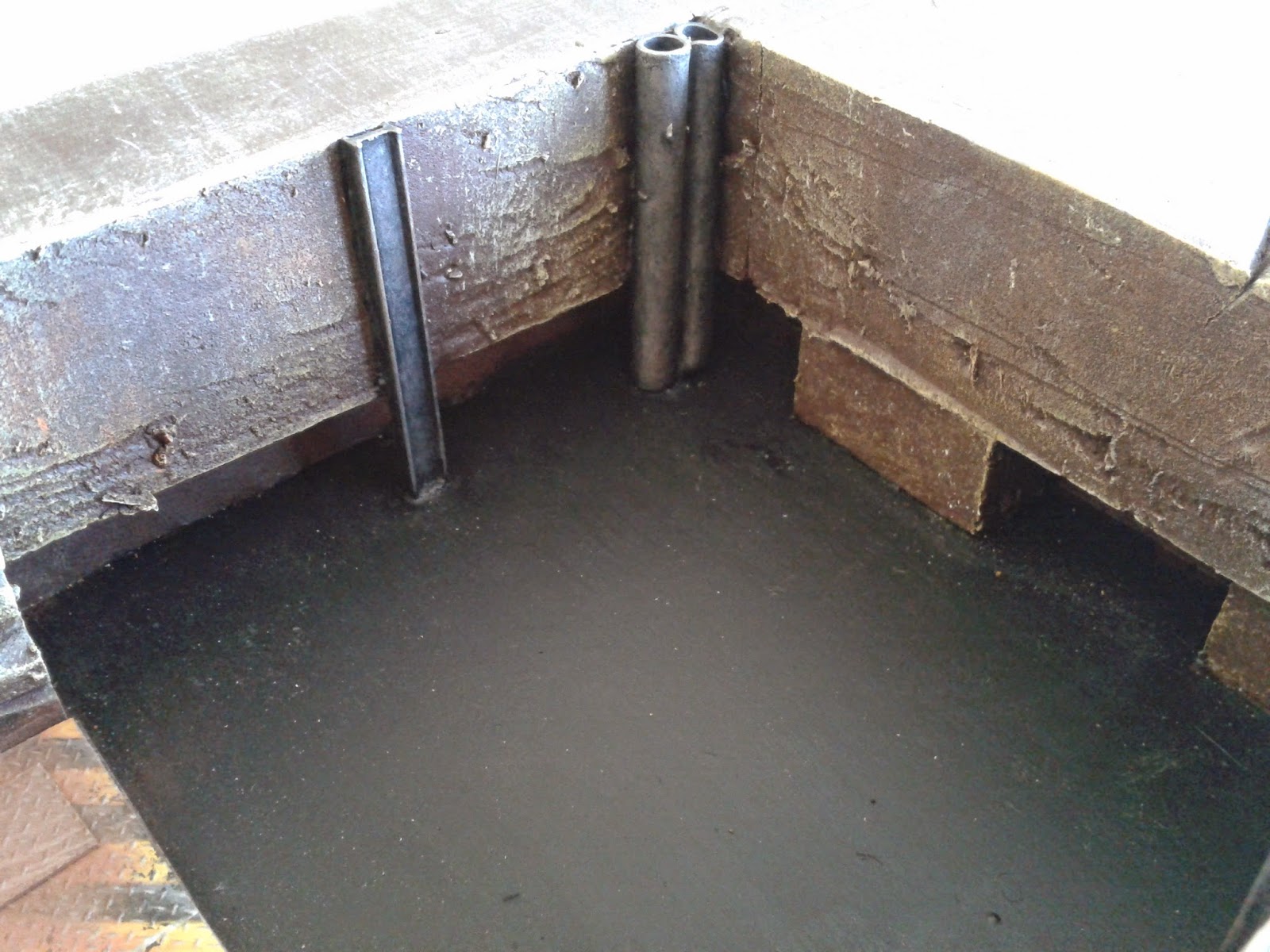 This is a shot of the elevator shaft. As I saw it there were two ways to do the shaft: 1) As the absolute bottom with a rock floor covered in debris and staining or 2) just paint it black so that it could convey an upper level of the mines so we can have one of those moments where a character could be pushed over the edge and into the black. 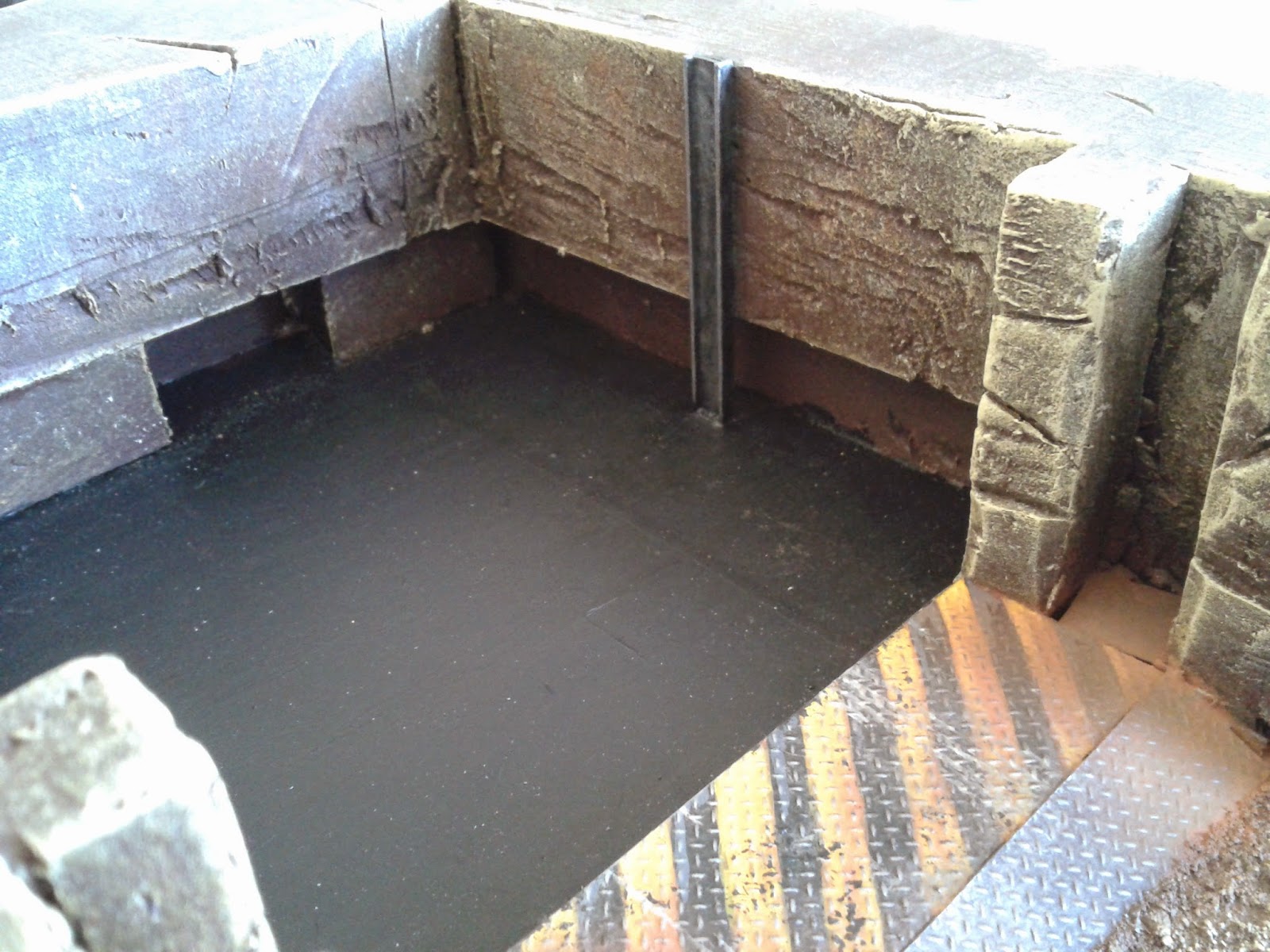 The girders represent the guide rails/track that keeps the elevator straight as it moves. 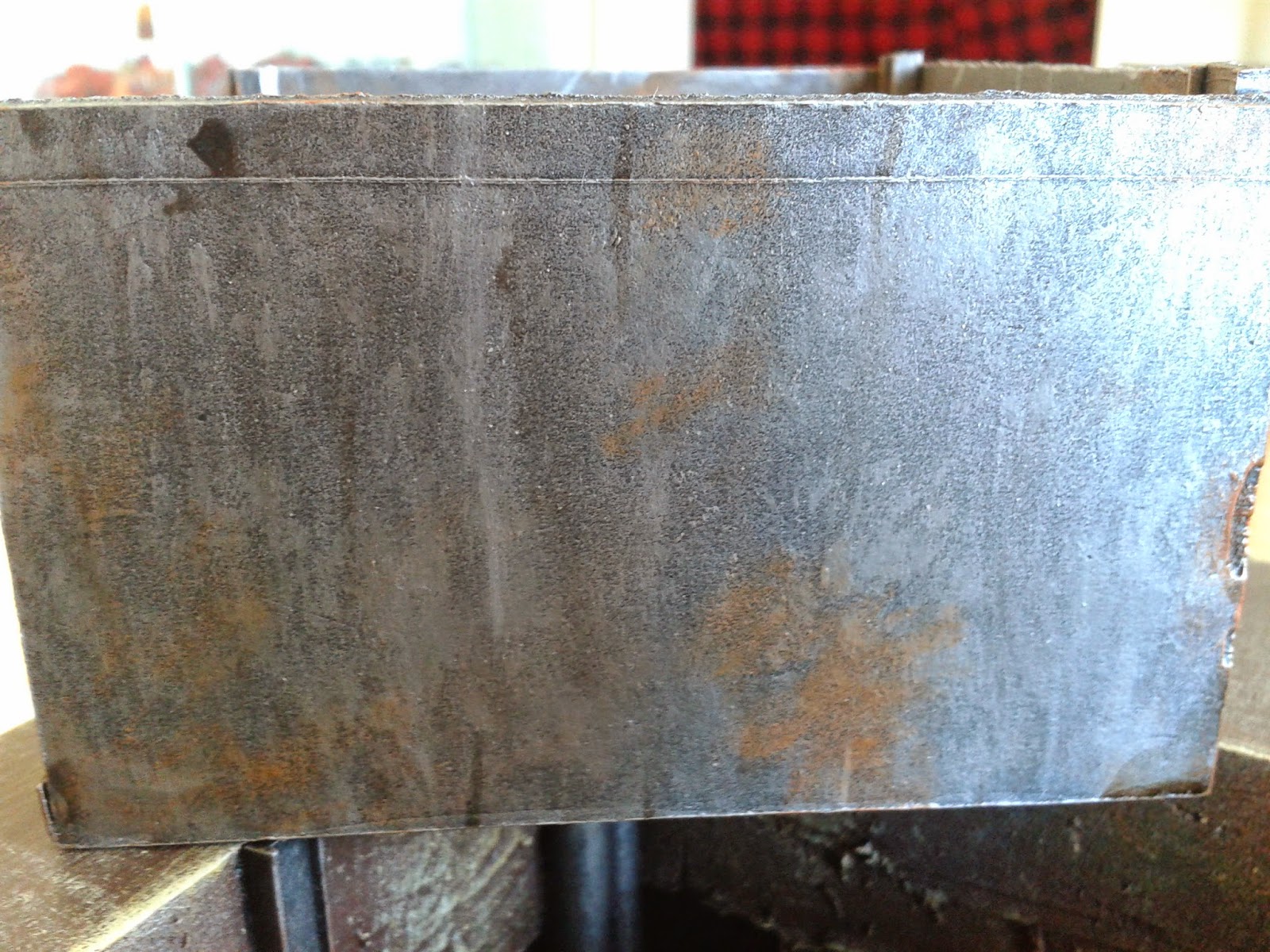 This is one of the elevator car sides when its outside of the shaft. 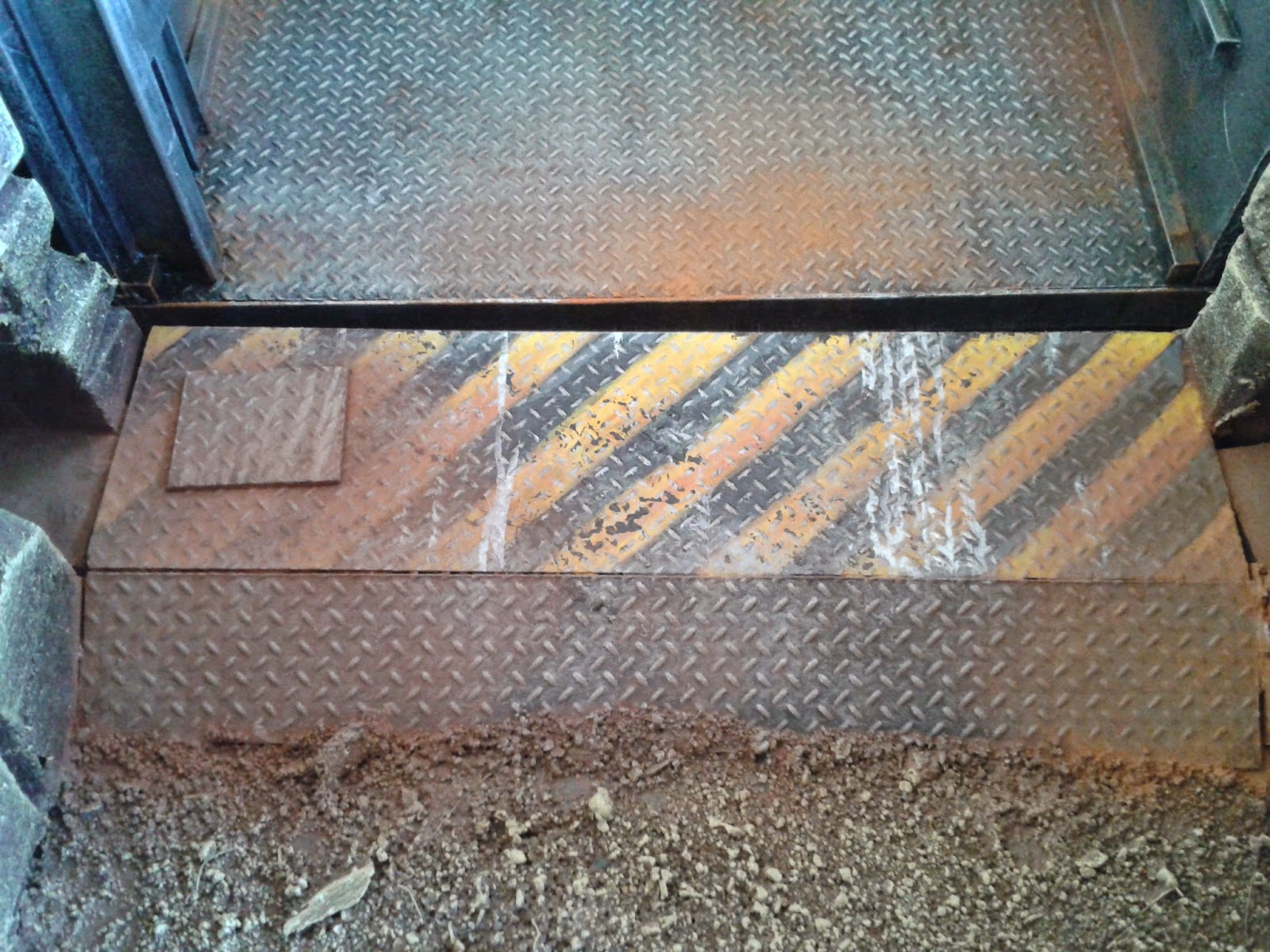 I'm really happy with the threshold and scraping. Once again I did the nod to my Necromunda roots with "caution stripes". After I painted and highlighted the stripes I did some stippling and light drybrushing with Boltgun Metal and Chainmail just like I did in Making Mine Scenery Part VIII. This threshold was twice as wide though and would be extrememly worn, so I wanted to lavish some more detail onto it. Next I used a small piece of green scrubby to sponge on some Chaos Black. I do this on my tanks and it looks great and knew it would fit right in here. Next I weathered with dry weathering powders: Forgeworld Aged Rust and Light Rust. That's when I thought to myself, "They are going to be dragging dumpsters, storage containers, and heavy equipment in and out of this elevator, so I watered down some Chainmail and dragged my Detail Brush in long straight drags across the tread plate where I expected heavy wear. When it was dry, I grabbed my brush that I used to apply the weathering powders and pushed them around some more to cover and blend my scrapes. 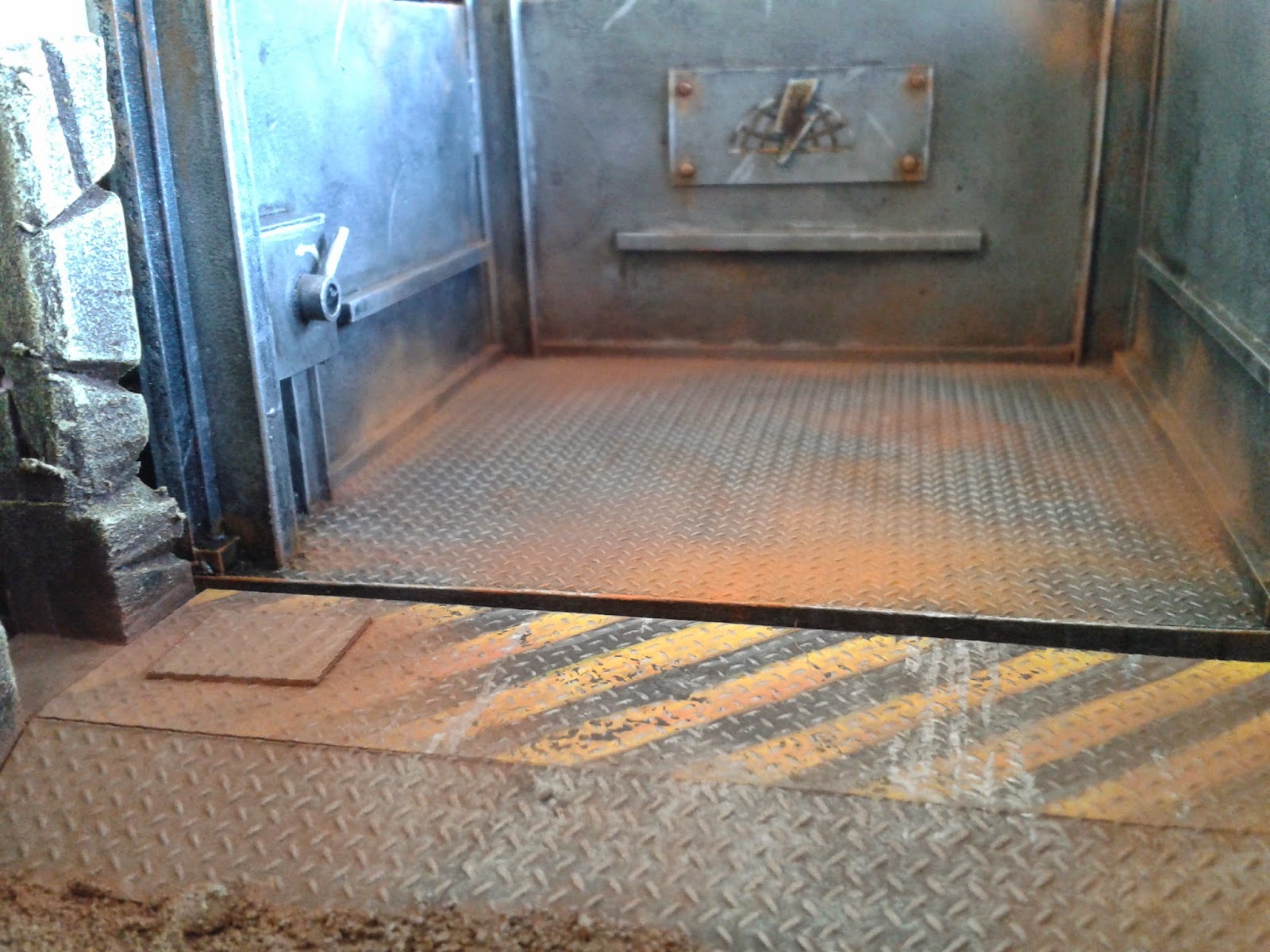 All told, with the scraping, weathering of the elevator, the elevator control lever, and the FerrumSky logo, I think I've built a pretty evocative piece of terrain that helps convey the atmosphere. 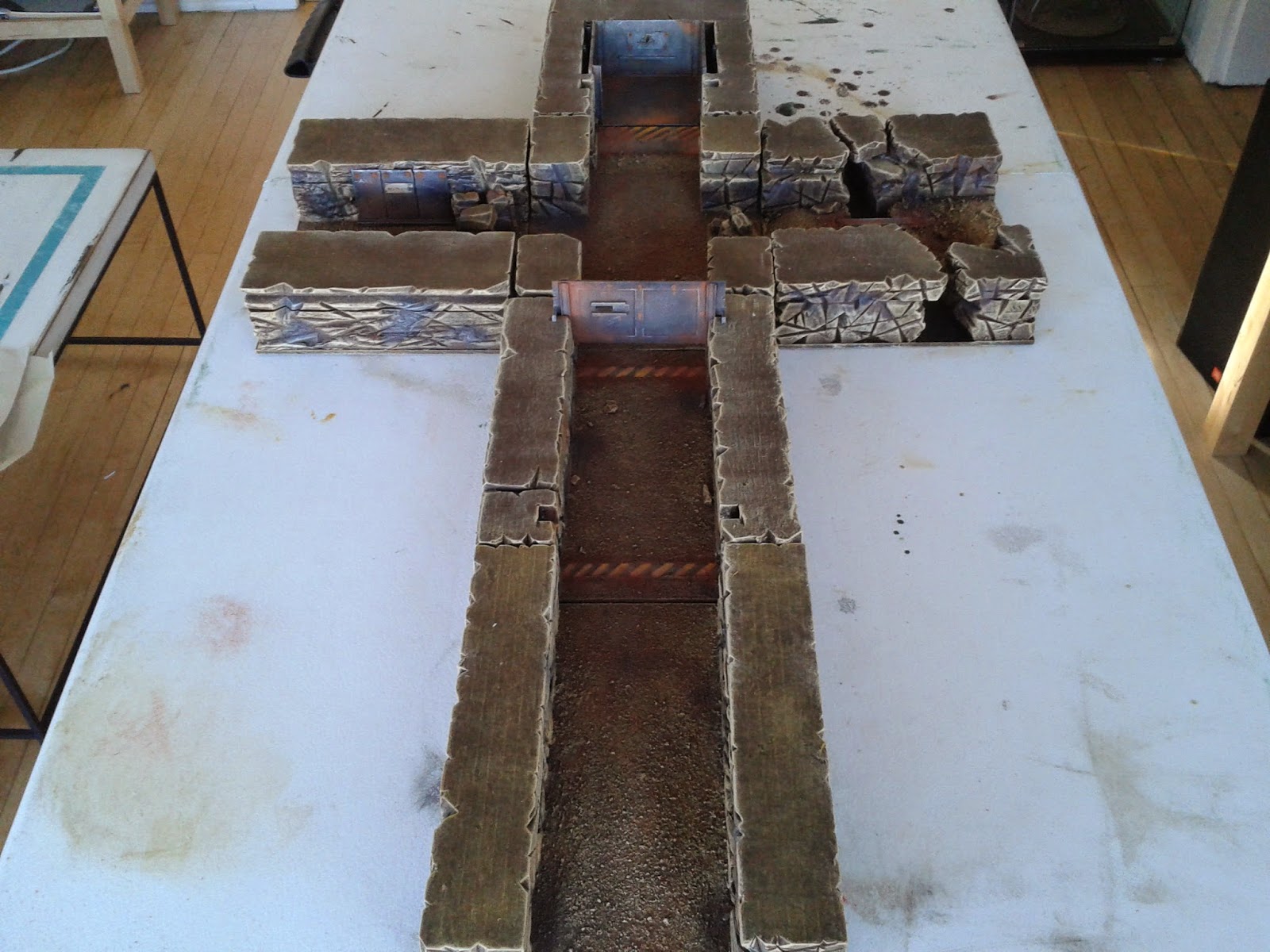 Here are all of the completed sections assembled together. Most games will be played on 2-4 sections and I'm up to 6, which gives me some options. I still need more, of course. 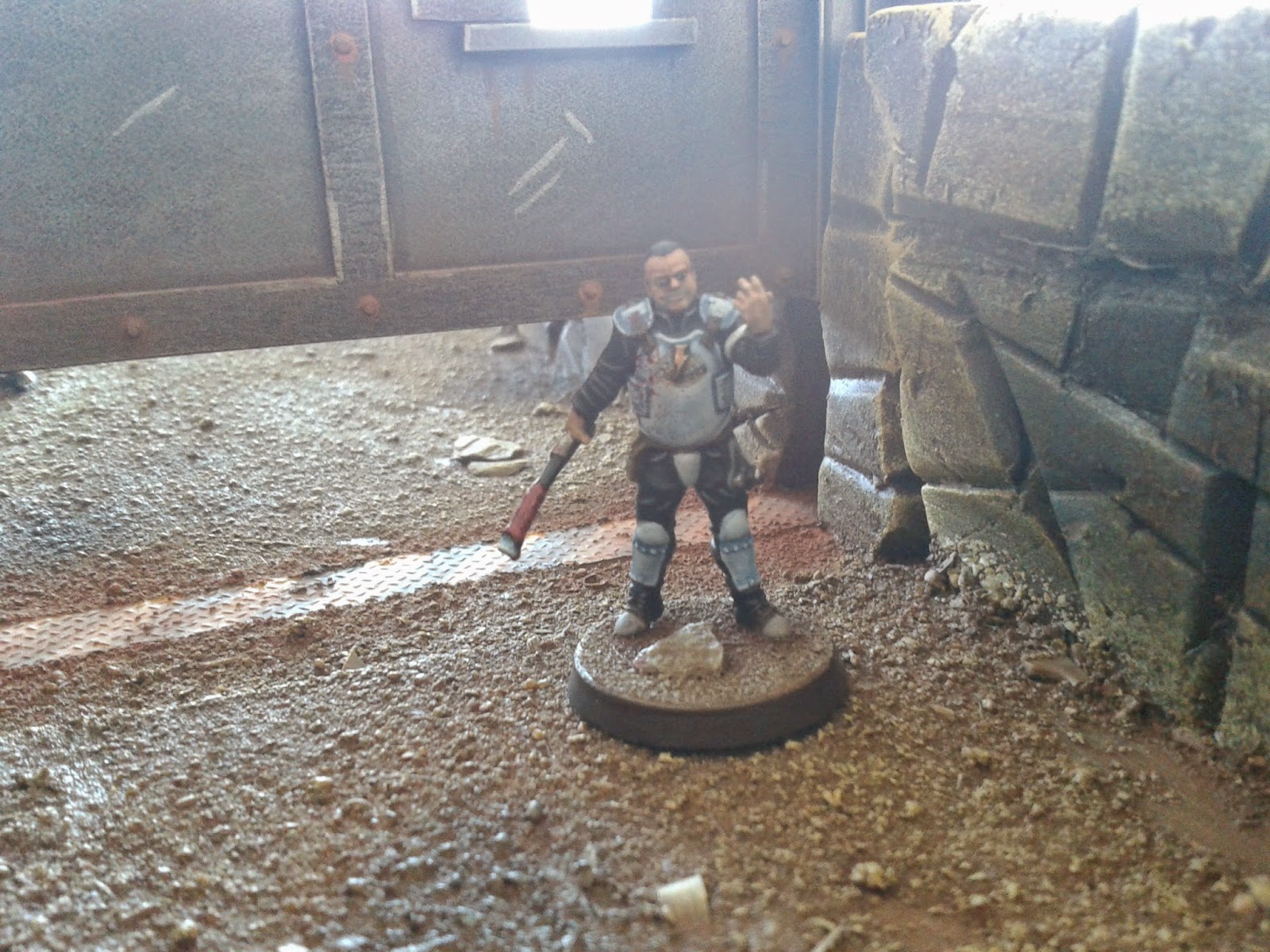 Finally, here's Officer Hickley hanging our by the "hydraulic door" built in Making Mine Scenery Part VII. I have to work on controlling the saturation of light even though sometimes I like the smokey look it creates.

What's next? I need to make a couple more doors and the freight elevator gate along with some more intersections and a bend, but little of this needs to be documented since it'll mostly be rehash. What I do need to work on though, is a section I started working on all the way at the start of this journey. 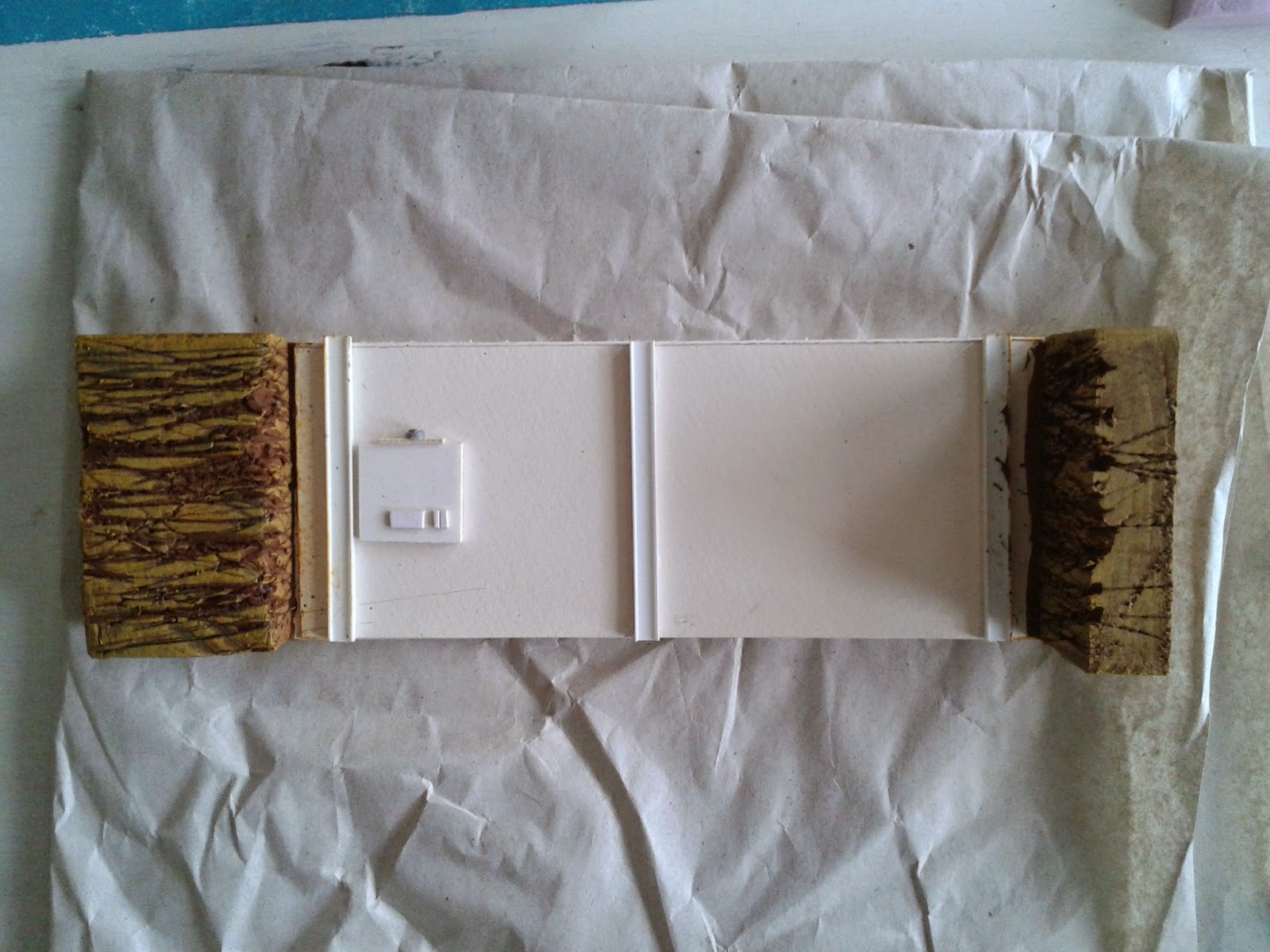 More on that, coming up. Keep the comments, questions, and suggestions coming. Is there a high adventure action sequence you'd love to see represented on the tabletop? Maybe I can make it happen. Follow Broken Contract on Facebook and Twitter. Thanks for reading!
-Nick