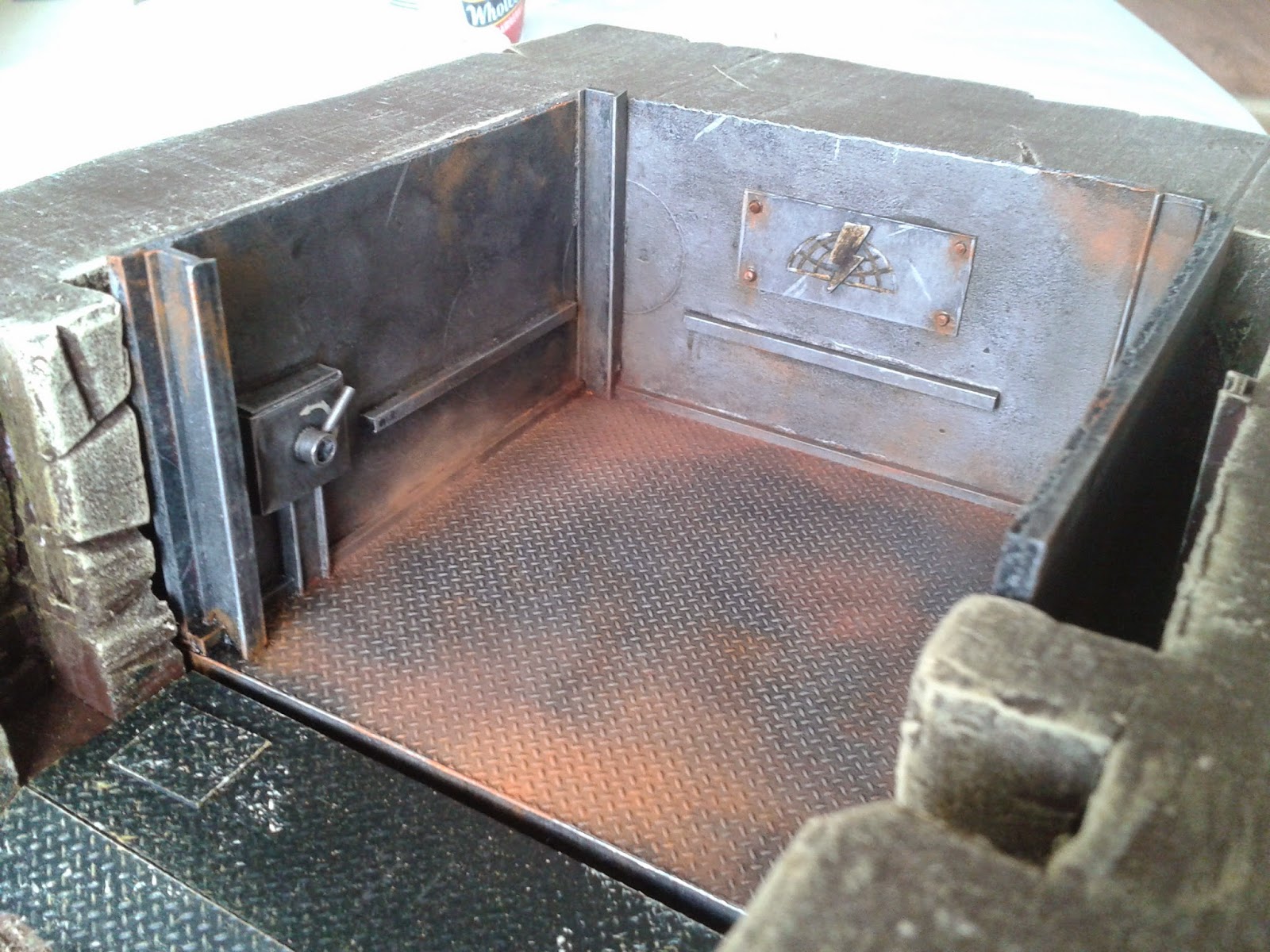 Greetings! If you're a first time visitor or someone who's been following the series, thank you for reading. My apologies to anyone who came looking on Sunday for the latest scenery post and found none. It was a busy and stressful weekend so I fell off schedule. That being said, we're back on track with our Sun/Wed schedule, so here it goes. As might be expected, this one is very picture heavy. 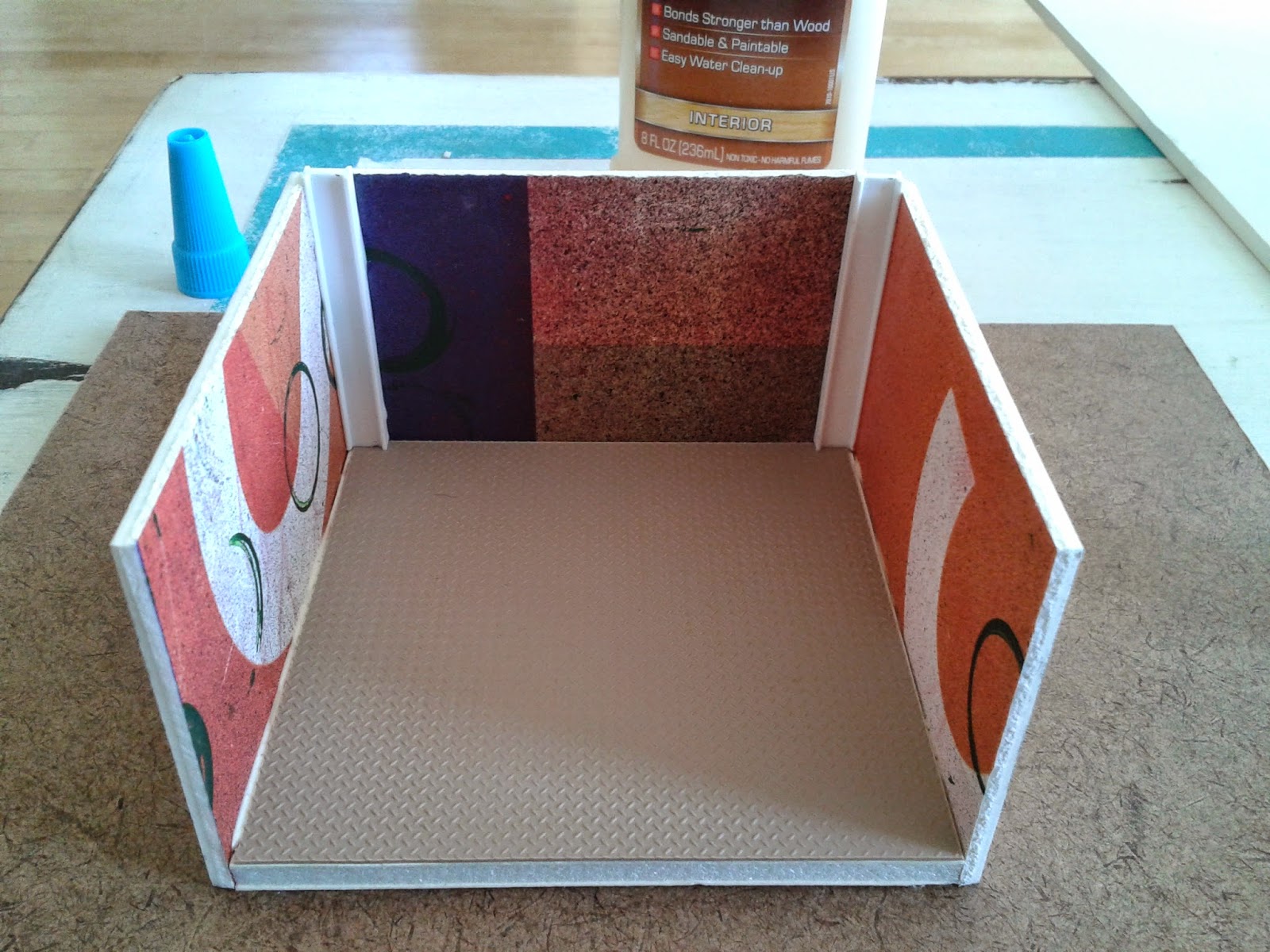 This is where we left off with the freight elevator car in Making Mine Scenery X. As promised, I worked on detailing it out. Today we'll add some additional rails/bumpers, signage, and the elevator control box which is where we are going to start. 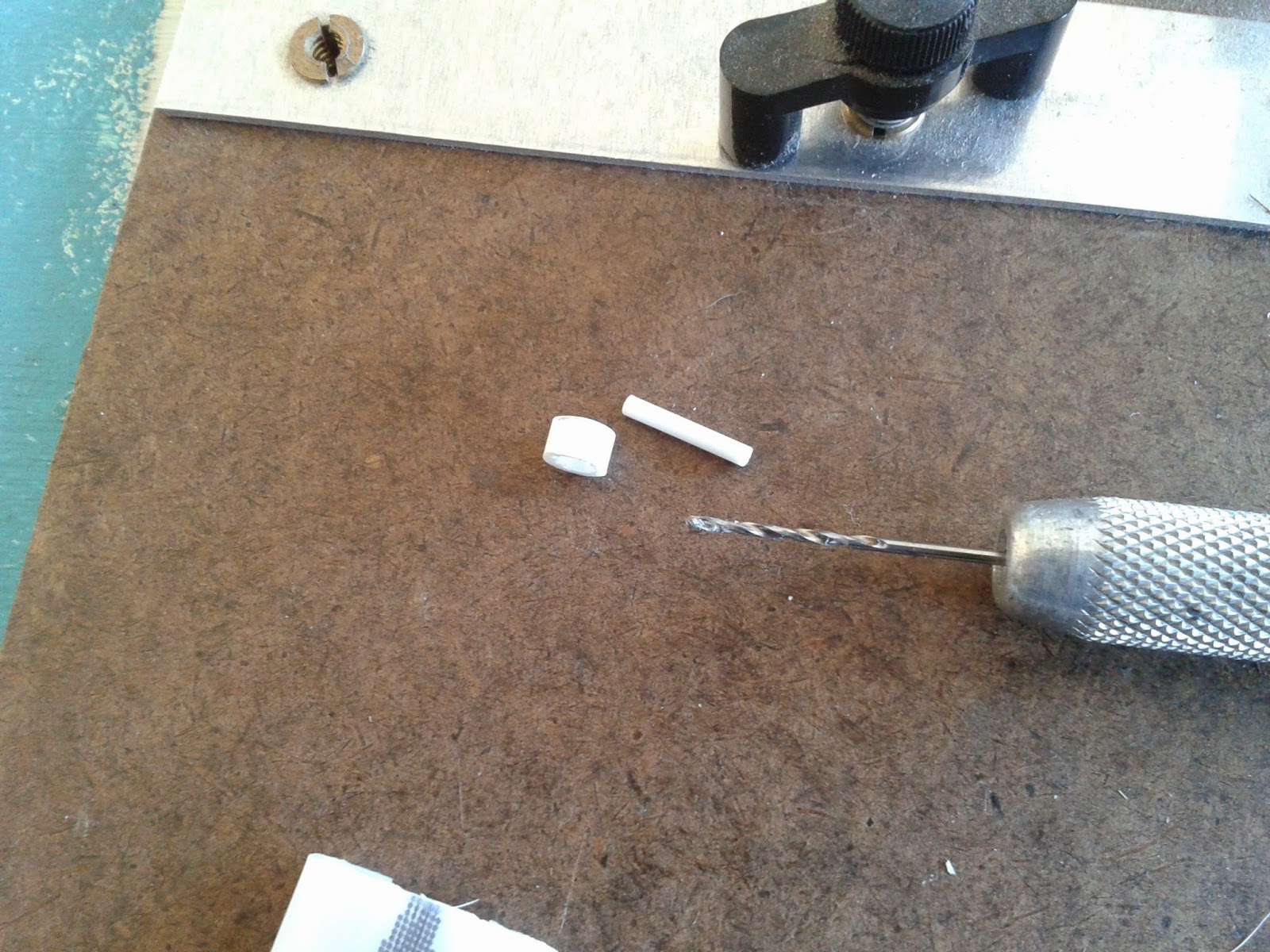 The sunlight was so strong you can't see the hole I drilled, but I had cut a piece of StripeStyrene tube about 3/16" (about the width of 3 pieces of 1/16" rod, pictured next to it. The idea was to create a lever by gluing the rod in the hole I drilled. 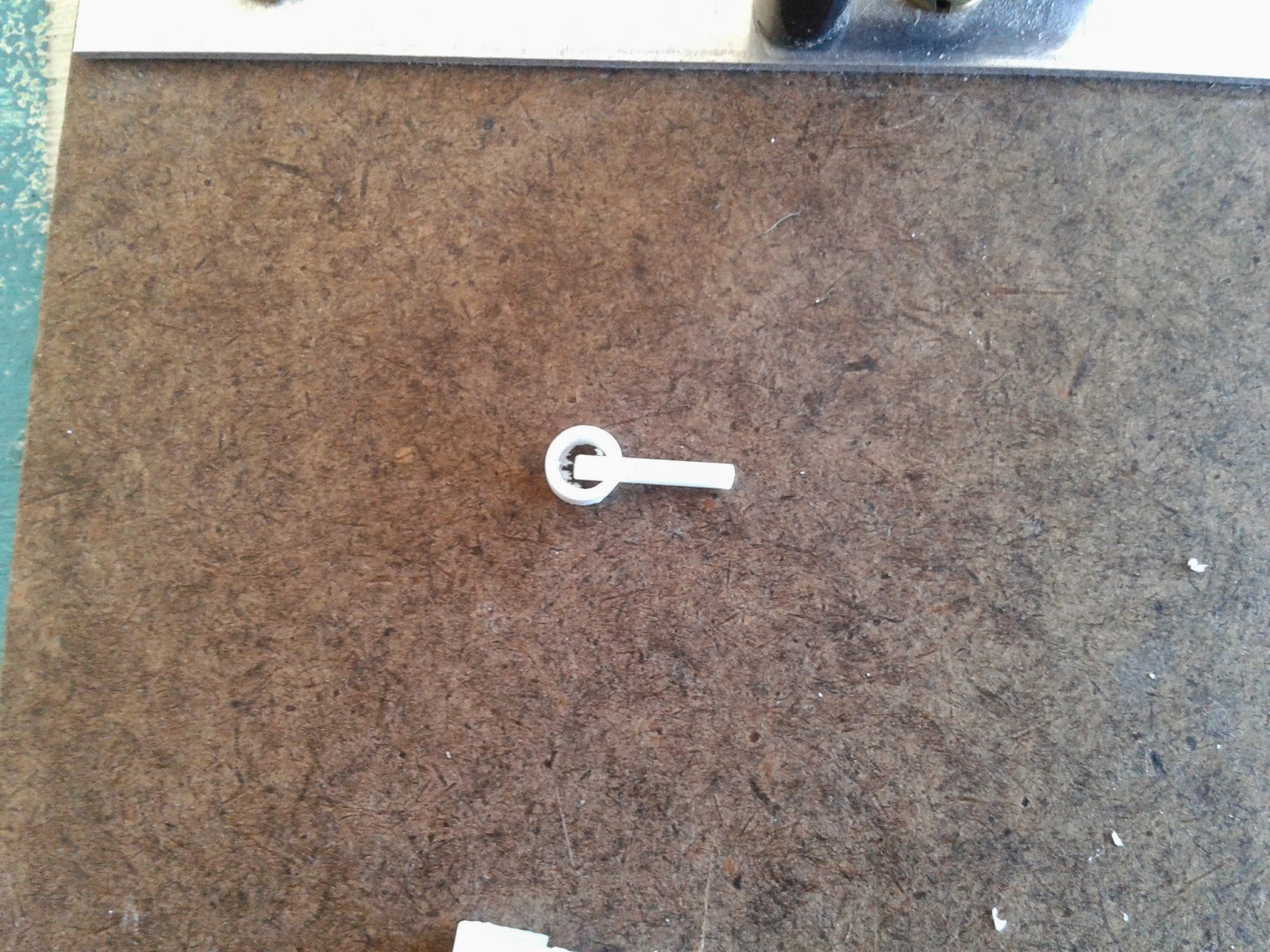 Here's a shot of the rod gluing in place to make my lever. 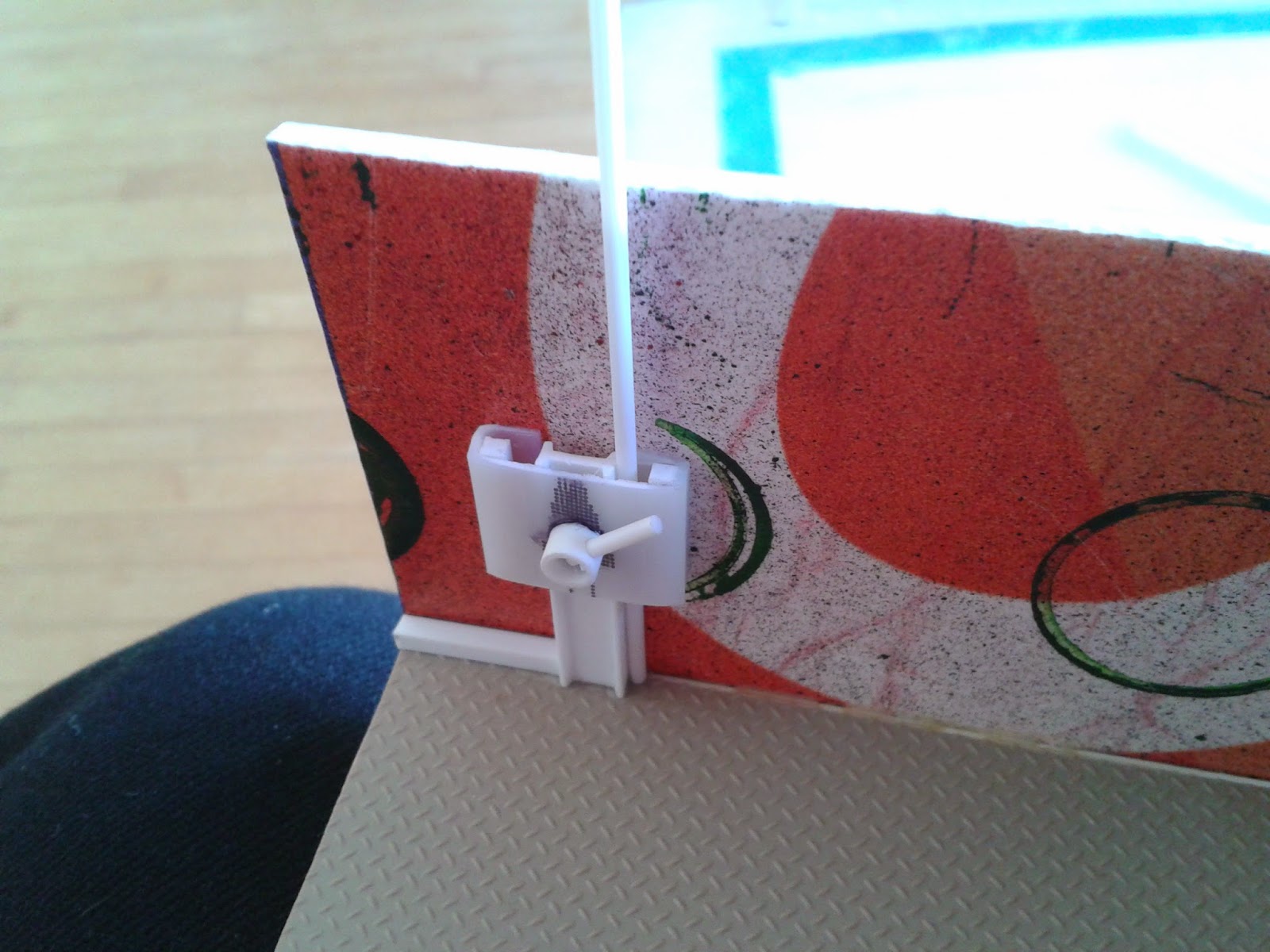 Now the main box is a piece of plastic garbage I acquired from somewhere. It was sort of fragile so I reinforced it with some Plastruct rod pieces and an I-beam. After I glued my box in place I wanted to add a tube that would protect any wires. I put some CA glue on a piece of 1/16" rod and slid it in along the I-beam 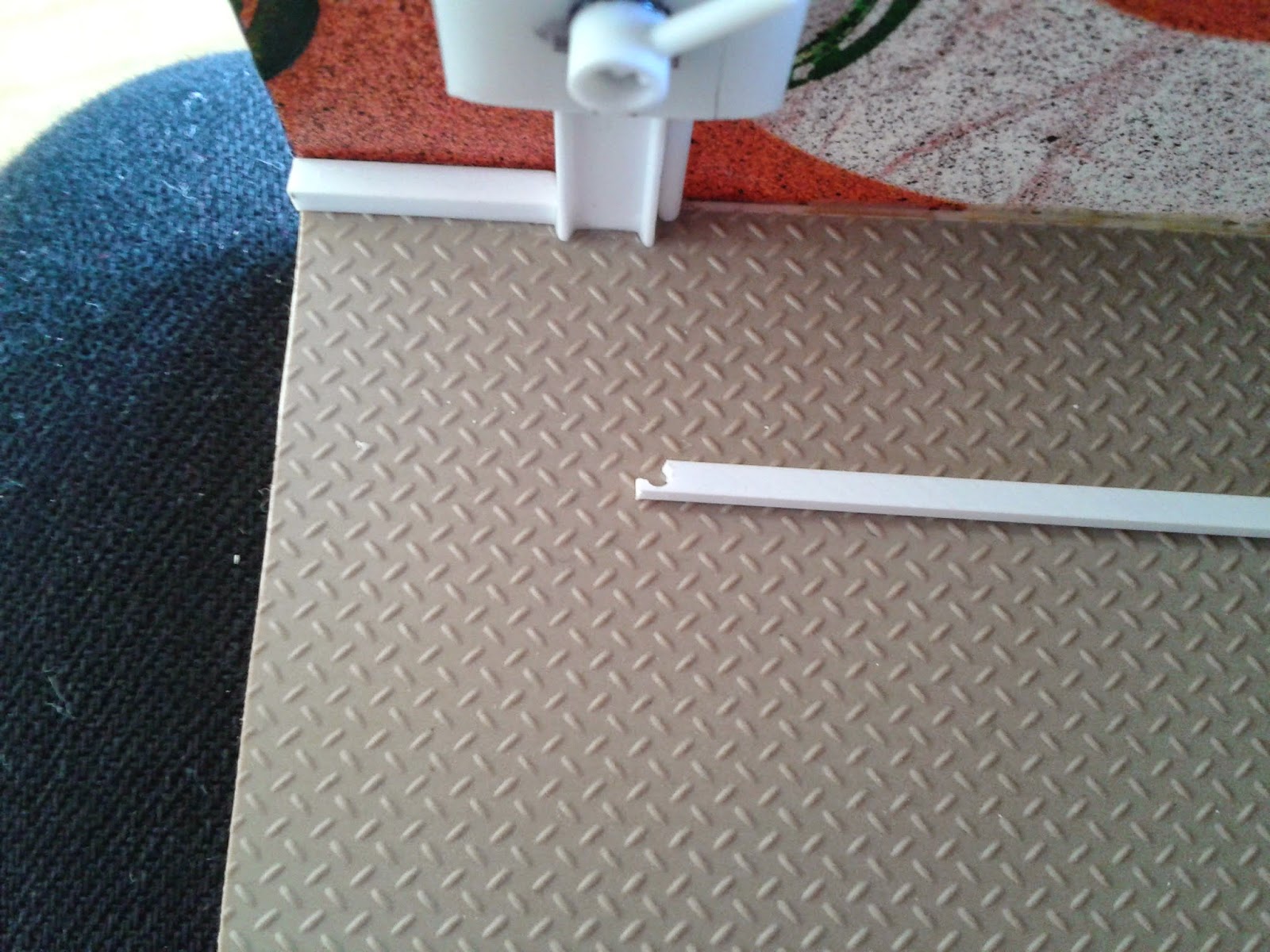 Next I began working on putting rod along the base of the walls. With my "wire tube" in place I wanted to make it look like it belonged there and wasn't an afterthought. I used my pin vice to drill a hole at the end of this square rod, then used a blade to trim it so it would wrap around my "wire tube". 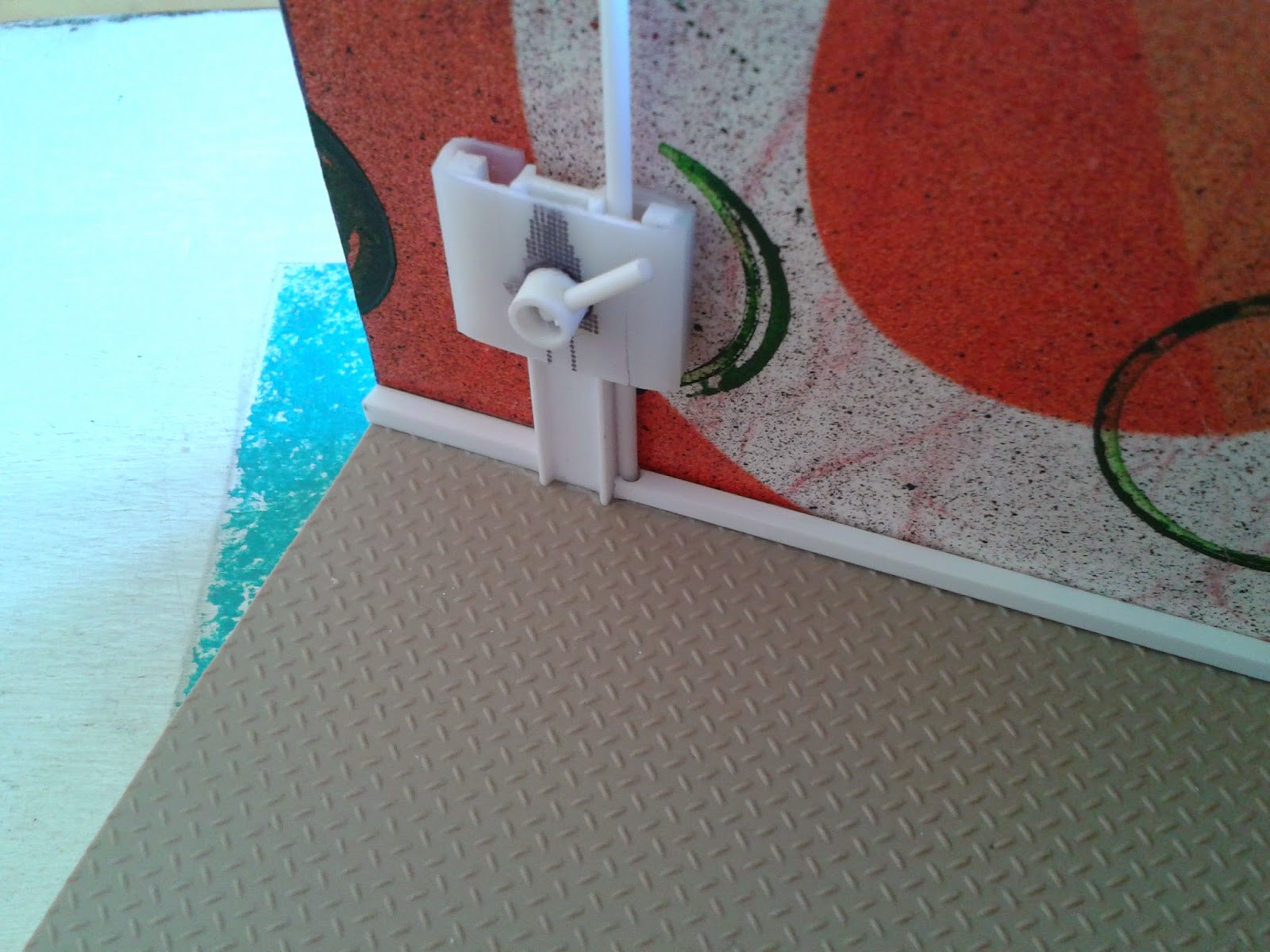 Here it is, glued in place. I was pretty proud of this so I'm going to pat myself on the back. 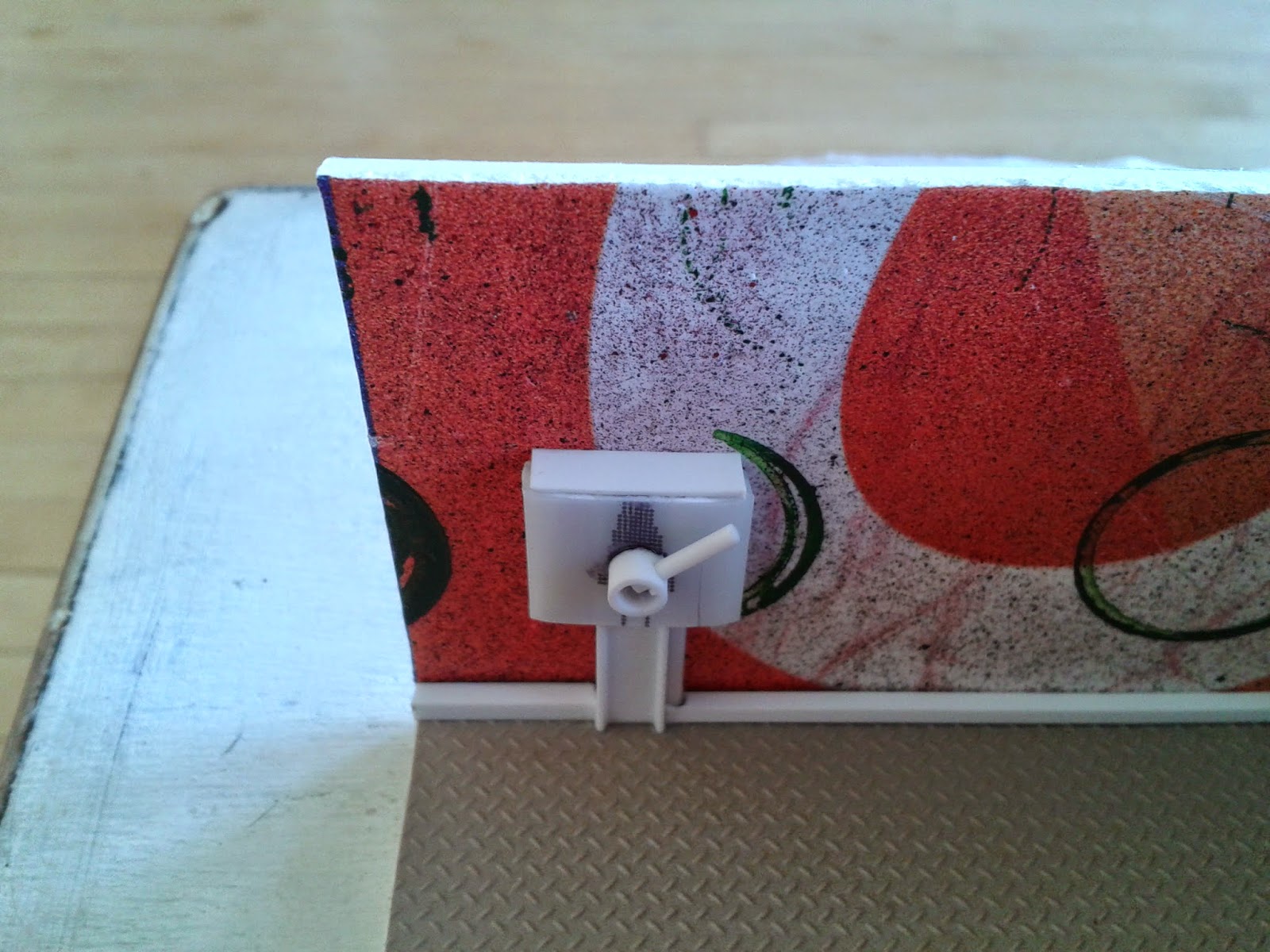 Next, I trimmed the rod that was extending through the box and made a cap and glued it in place. 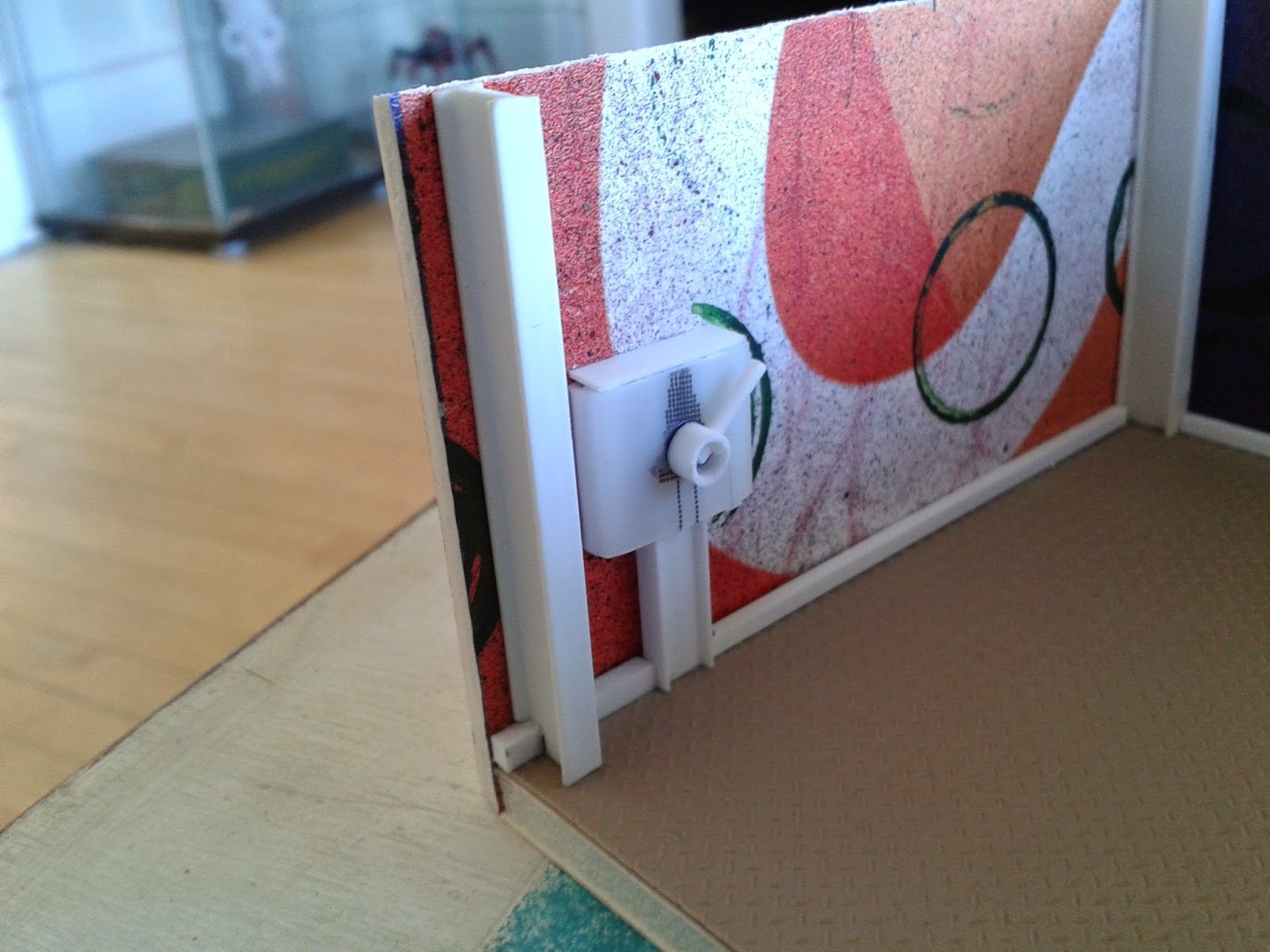 Then I came to a realization that you'll find in industrial settings like this.  When you're rolling ore carts, dumpsters, and storage containers into this freight elevator, invariably someone is going to smash into the control box, maybe even rip it off the wall. So I added an I-beam. I cut it around the base board rod so it looks like it might have been added "after the fact". 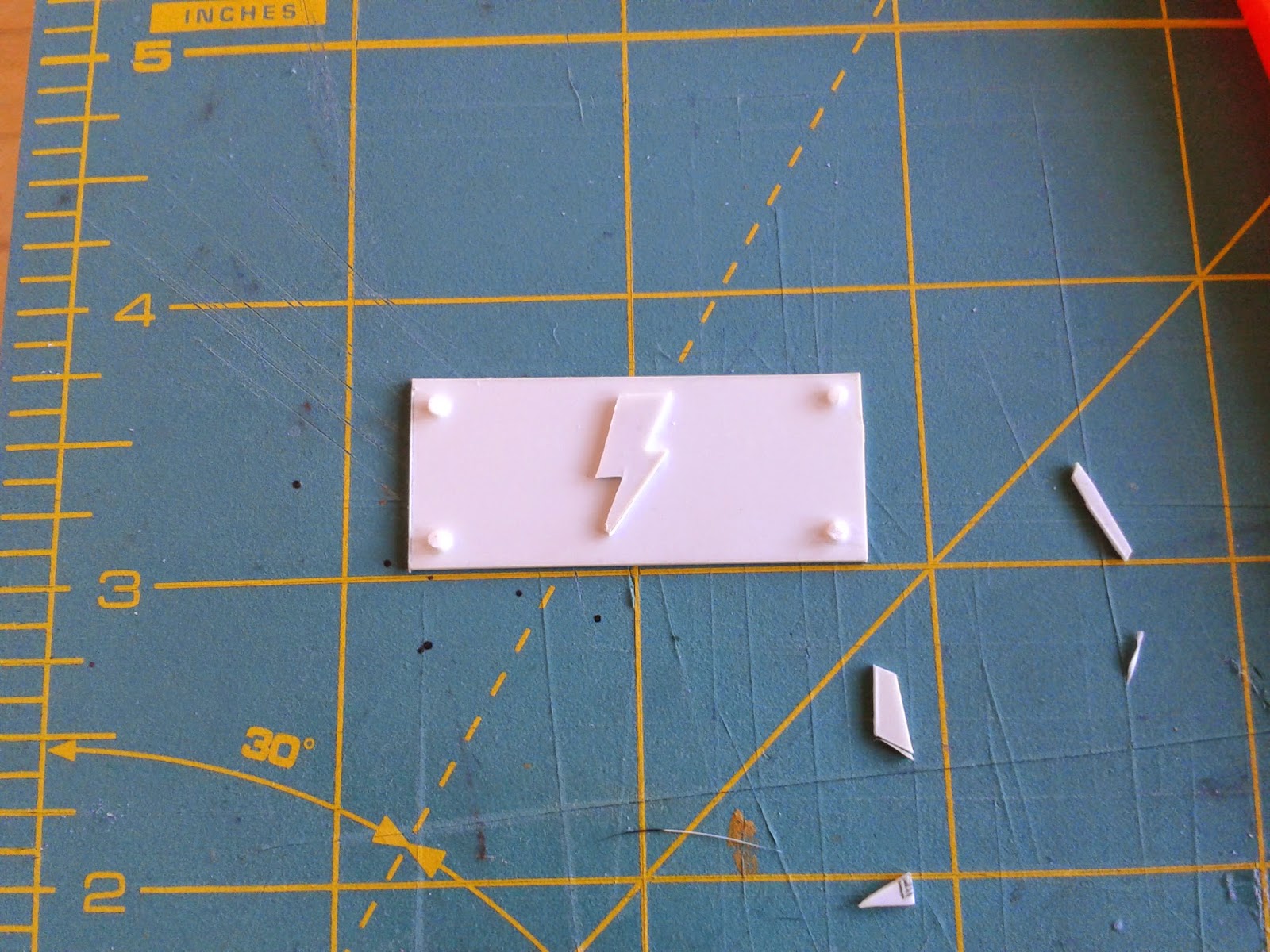 With the mine being owned by FerrumSky, I expect their corporate logo being everywhere to reinforce their dominance or foster a brand loyalty akin to patriotism in our dystopian future. The logo is a dome with a lightning bolt so I quickly cut a sign plate and added some bolts and a lightning bolt. 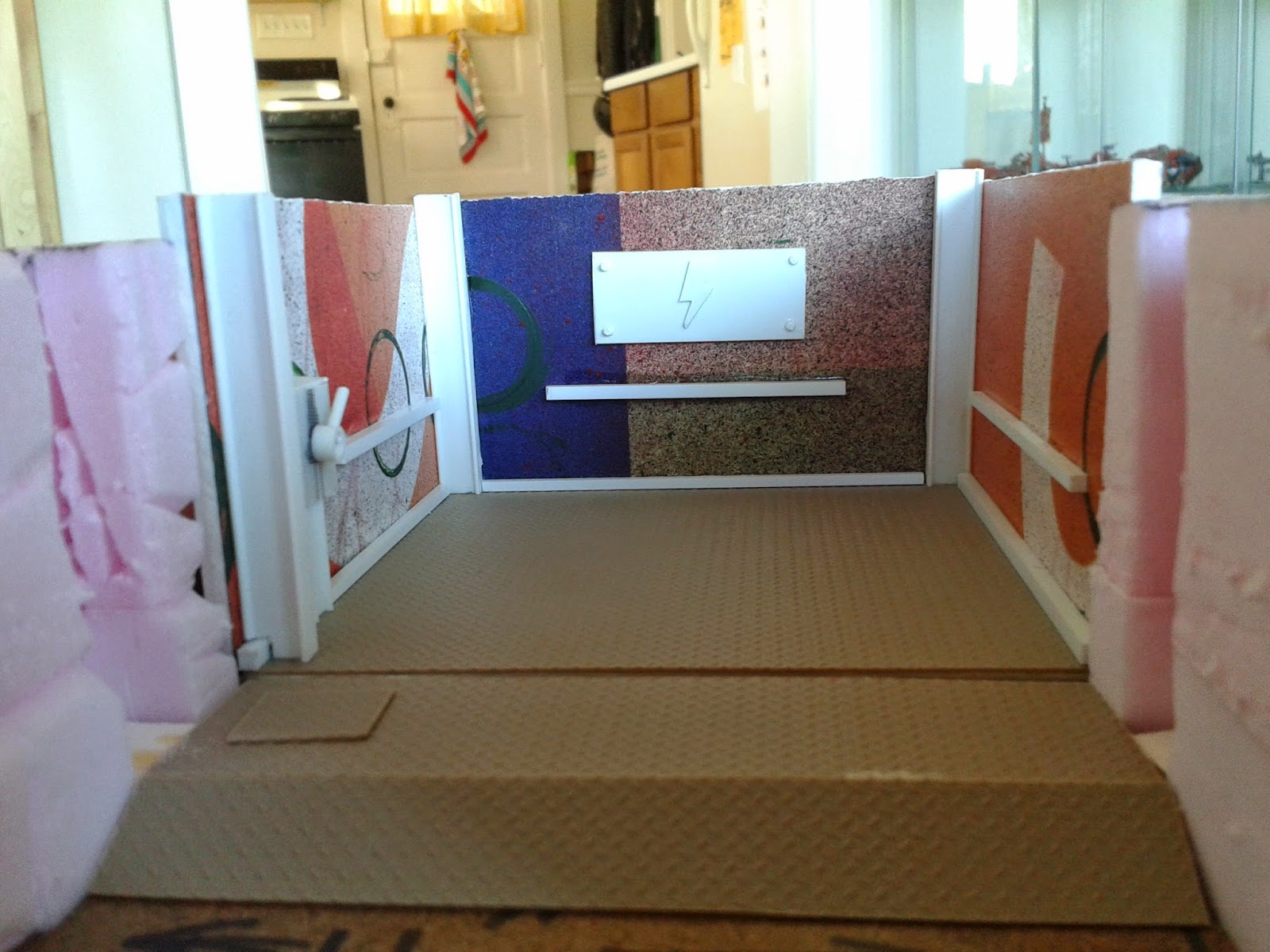 Here's the sign in place, but its actually only attached with blue tack in this picture. I primed and painted it separately so I could do the dome without trying to shove my fist in the elevator car. You can also see I added a bunch of waist height rails around the car. This is pretty standard in elevators to protect the walls, acting like bumpers. 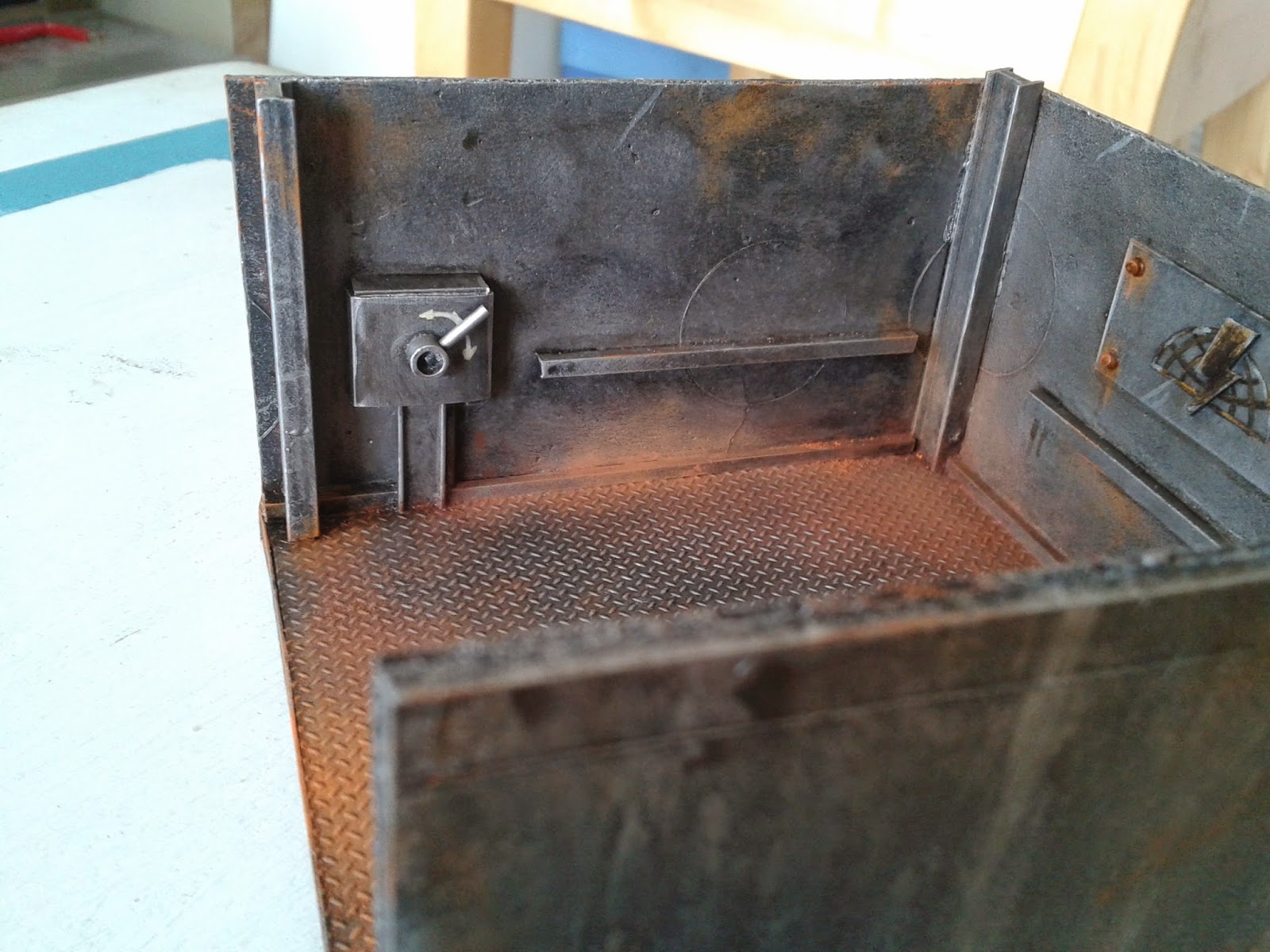 I'll spare you the details of painting the car up because they are almost the same as in Making Mine Scenery Part V, except rather than starting at Tin Bitz, I started with Boltgun Metal on Chaos Black Primer, and then darkened it up with Citadel Nuln Oil and Agrax Earthshade to make it a little more oily/drippy gross than just dirty/rusty. I also painted an arrow behind the lever to help reinforce what it is - an old tyme freight elevator control lever. 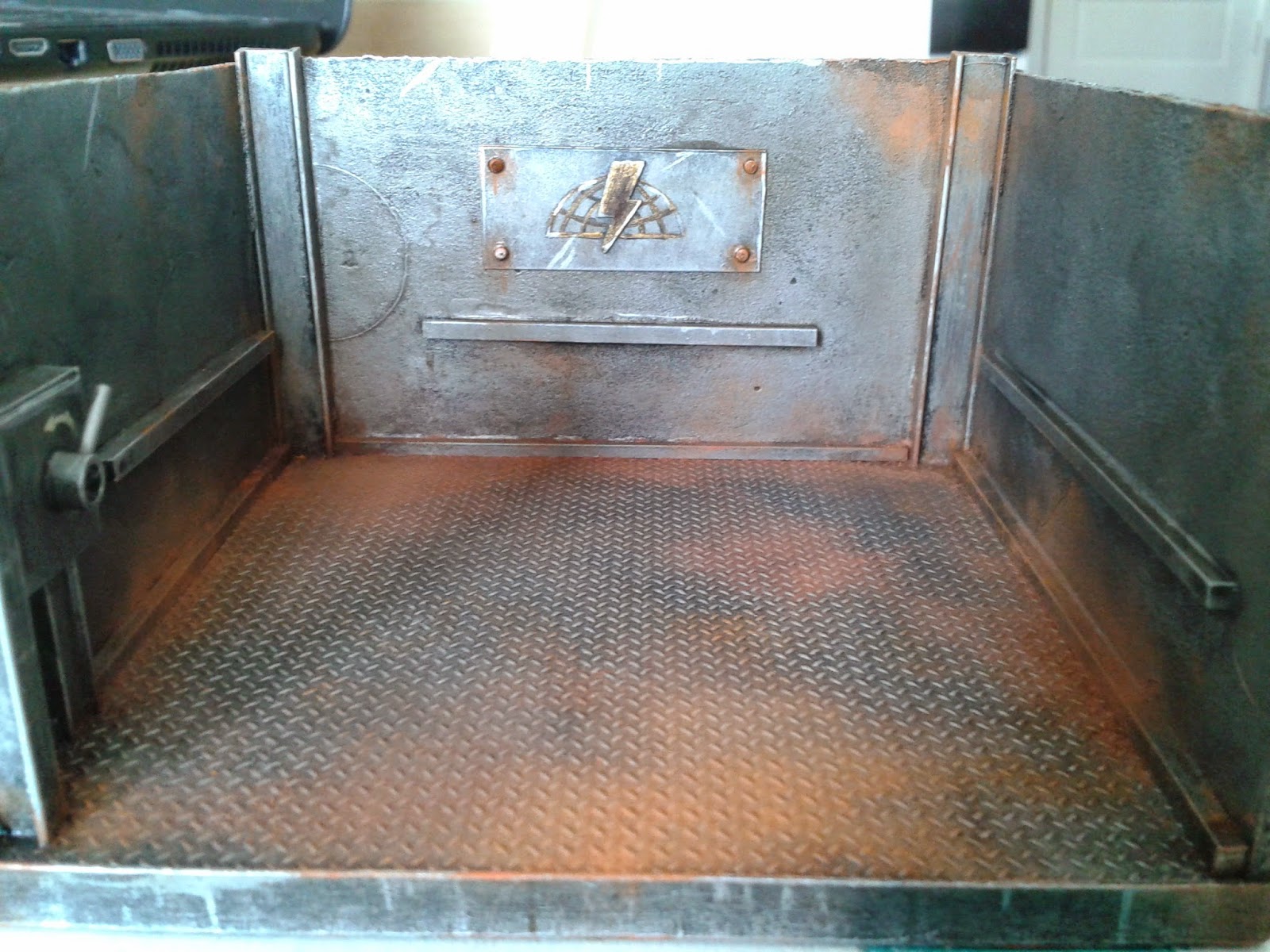 My FerrumSky logo doesn't have quite the pop I wanted, but I've got ideas on how to do that in the future. You might also note that I also used some Forgeworld Light Rust on this piece to add some additional weathering tones. 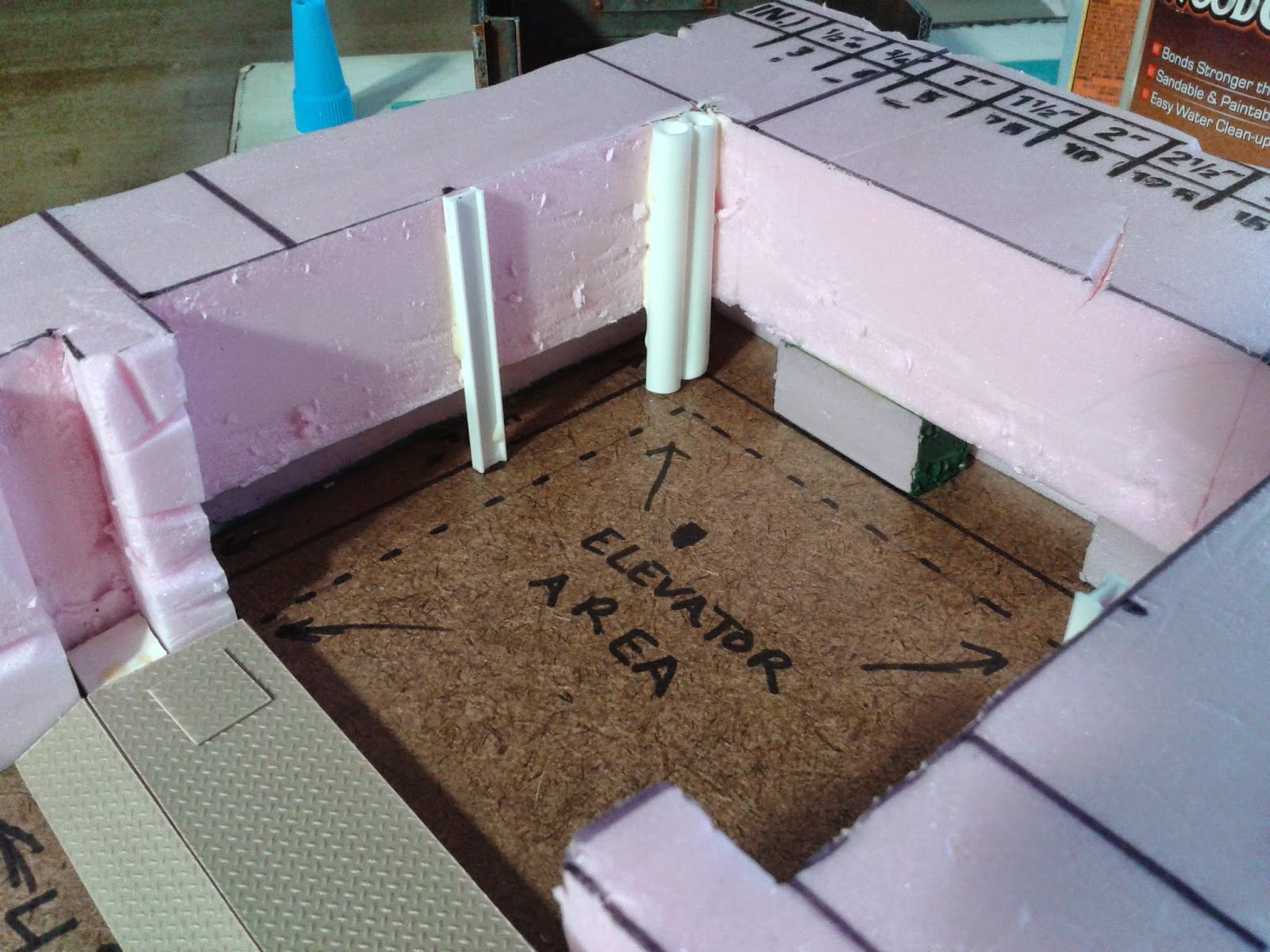 Finally, yesterday afternoon I added a "patch" to my ramp and some other details to the elevator shaft, like I-beam guides for the elevator car and some random tubes. After I completed this I started base coating and painting it up today. Coming up I need to build a door or gate for the car. I'll show that off next time. There's still a bit to go before this piece is done. 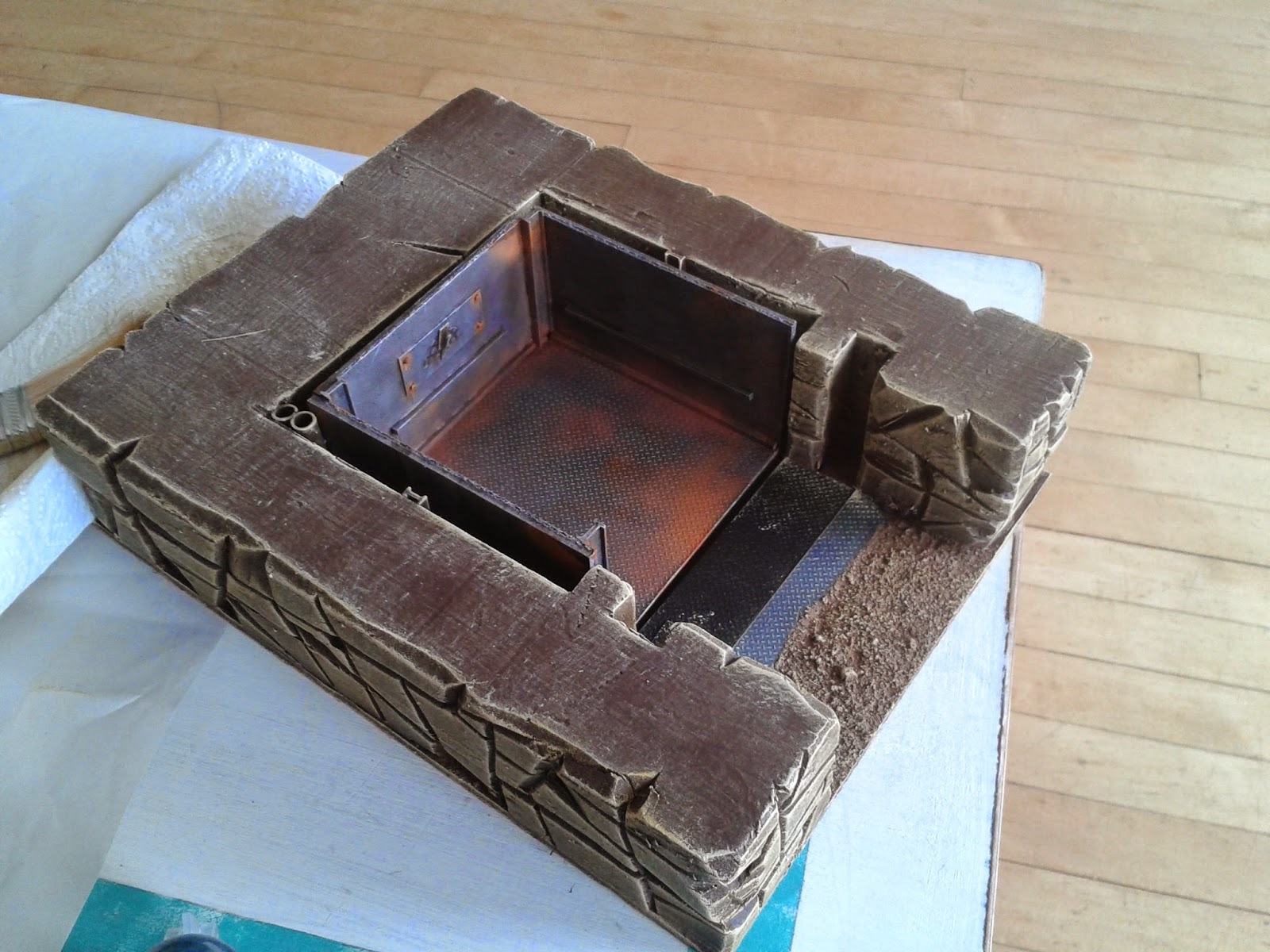 That's it for today. I'm official for AdeptiCon, so look for me in the main hall running demos on some of these mine board sections with a bunch of painted Broken Contract minis. Until next time!
-Nick