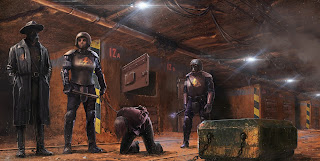 Black Squadron Security
Security Officers or Prods oversee the daily toil of the Tracted on behalf of the Corp they work for. Ensuring quotas are met and the work is done gives them their purpose. They exist to ensure that Contracted do not slack off, inflict calamity upon themselves, sabotage their work, or attempt to organize. They serve as the de facto police, supervisors, and in a bloody minded and militant way as the middle management of the dark and twisted life that causes so many to risk their necks before enduring another day under the boot of the Prods.
Many corporations prefer to keep their Security Force in-house, but private Security Firms are big business as well. Often there are layers to the corporate security structure, with in-house security being better armed, better paid, and invested in the continued profitability of the corporation they work for. The private Security Firms are employed because they are a much cheaper option. Private Security Officers are poorly paid and are given inferior equipment and training. They provide warm bodies, semi alert and semi capable, who are there to provide greater numbers when needed. Still, they know their lot is superior to that of the common worker and they have no desire to change that paradigm.
In the event of any sort of work stoppage or Break attempt, Security Officers are paid to intervene and stop not only the Breakers, but to shut down any widespread frenzy that it might create. Riots need to be crushed before they can start and that is where the Security Officer training excels. Overseers and Officers employ shock batons, arc pistols, and repeater rifles with rubber bullets to great effect to rapidly halt budding insurrection without significantly damaging corporate property.

Pick up the Black Squadron Security Faction Set from our webstore.