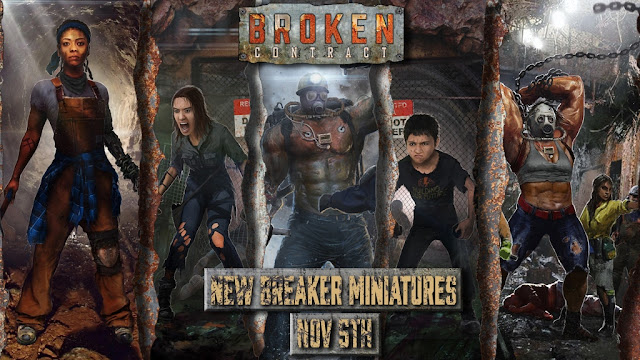 In less than a week we will be running our next Kickstarter. This one is to fund the manufacture and expansion of our Breaker range of miniatures. If you've been following Breaker Press for a while, you've probably seen images of some of these sculpts appear over the last year and a half (yes, the gears grind slowly at Breaker Press). It is finally time to send them to the caster, but we need your help. We are starting things off with the two Gen-Mods that we've been sitting on for quite some time. These will be the basis for the Kickstarter campaign. The campaign is going to start small - we just need to raise enough money to cast and ship these two models.

If the campaign goes well, the Stretch Goals will be determined by you, the community. The first Survey went up and the first Stretch Goal will be for the female Breaker Crew Leader.

Hopefully, we can work our way through all of the concept art depicted on the ad at the top of this post, and then move onto some additional arms and heads for some of the sculpts, or maybe something else entirely - like new game content, or dogs? (Yes, they came up again in the survey!)

Many of the sculpts we're trying to fund are ready to go, like the female Breaker teen (above) and the male Breaker child (below).

This male Breaker child would look great with alternate arms for a length of pipe, knife, or even two buckets. Add in a gas mask head and maybe one other and you've got a really flexible model kit. I'd love to make that happen if that's what you all want as well!

I hope this looks interesting to all of you. The Kickstarter launches November 5th!
-Nick