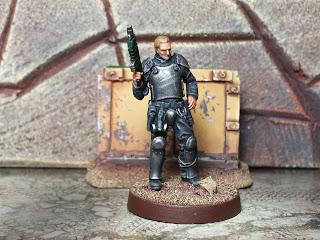 Our first new model of 2017 is available for pre-order now. Adam Walker was developed around the specs and likeness of one of the Backers of our first successful Kickstarter, back in 2015. It's taken a long time to get this character from idea, to concept, to sculpting, and then finally, to production. I think he demonstrates a move forward in our evolution and I am really happy with the results. 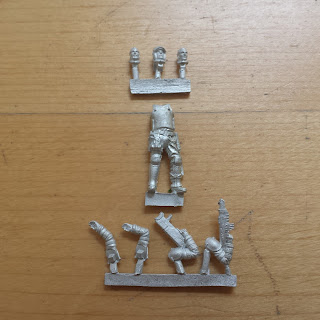 The Adam Walker model comes with three different heads to choose from, and two different sets of arms, giving you multiple possible builds, and increasing the utility of the model. In Broken Contract, two weapon options are the Arc Carbine and the Crowd Control Repeater. The Arc Carbine is a high powered taser rifle. It has a low rate of fire, but a high likelihood of dropping it's target in one shot, leaving the victim incapacitated and easy to put in Restraints. The Crowd Control Repeater is largely a weapon of suppression. It fires D3 rounds per Action, and is usually loaded with Rubber Bullets that remove Actions from the victim, rather than killing them. "Usually" is the key word when describing it's non-lethal status. 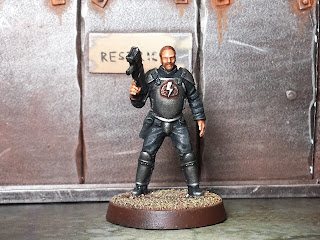 One of the fantastic evolutions in design has been that the new sculptors, 3D Breed, made the parts fully compatible with the Overseer Wire Billins model, designed two years ago by Prodos. In the above photo, you can see the Arc Carbine arms and bearded head on Overseer Billins' body. 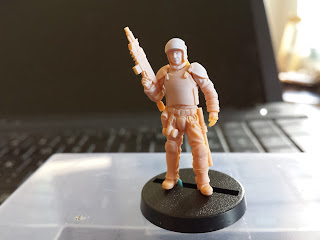 Here's a final shot to show you the generic officer head on Adam Walker's body. This new kit offers great options for players and modelers, whether you play Broken Contract, just paint, or intend to use the model in another indie game, like This is Not a Test.

Adam Walker is in production now at Valiant, and should ship on July 19, 2017 barring any unforeseen complications. You can pre-order Adam Walker on our webstore right now!