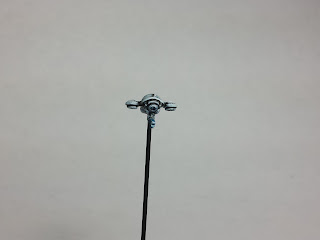 Drones are used extensively throughout the FerrumSky mines to monitor all of the work sites and barracks areas. They exist to ensure everything is functioning smoothly. Surveillance Drones are equipped with a central wide angle lense camera eye and a stereo microphone array to be the eyes and ears of the administrators situated above ground. Drone pilots sit for endless hours each day in a command center atop the mine watching and listening. The mines are an expansive space and every area cannot be directly monitored by the Prods, so the Surveillance Drones patrol and occasionally engage workers who have wandered out of bounds. In case of these circumstances they are equipped with an Arc Discharger. The Arc Discharger is identical in effect to the Arc Pistol carried by many of Black Squadron Security staff. Quietly swooping in with the Arc Discharger, a Breaker can be felled with this short ranged taser weapon while the pilot radios the nearest officer to restrain the victim.

This is the first in a series of articles on how to paint the various denizens of the FerrumSky mines. One of the things you will notice is that I mostly use paints from the Citadel Color range from Games Workshop. Those are my roots so that's what I've used but you are encouraged to use whatever colors or ranges you like. These are just tutorials on how I got the look that I did with these particular models. 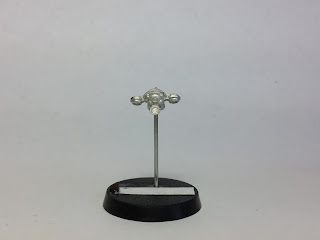 To get started, clean the mold lines around the horizontal perimeter of the model. They are most prominent on the hover fans and the rear thrusters. Use a pin vice to deepen the hole for the metal rod/flying stand and also use it to drill a hole into the center of the base. This was a slotted base so I super glued a tiny scrap of paper over the slot to give it a flat surface to texture later. With my model cleaned and holes drilled, I attached the Arc Discharger or Sonic Disruptor (note: you're going to see both during this tutorial.) When that was dry and secured I glued the rod into the model and into the base. 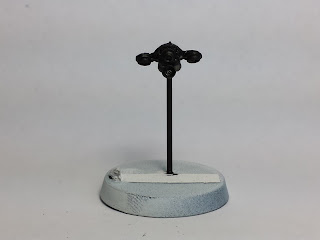 Next I primed the model black. Now, you might notice, "hey, he primed white and then painted the drone and the rod black." Yes. This is true. I'm out of black primer so I did do exactly what you said. But the end result is a black surface layer to begin work on. 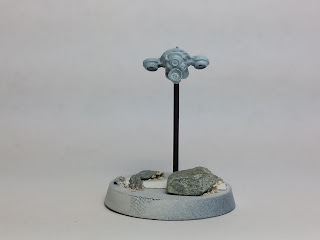 Next I gave the model multiple base coats of Fenrisian Grey. I needed to let these thin layers dry between applications so I glued down some rock fragments on the base. Normally I do this at a later stage so I can properly get in at feet and legs but as these models hover above the surface I saw no harm in making use of that drying time for other things. 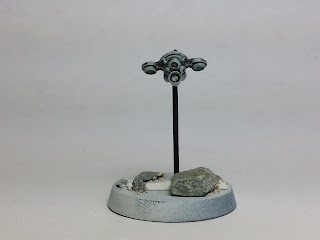 In a rare deviation from the Citadel Color range I decided to wash the model with Secret Weapon Soft Body Black rather than my usual Nuln Oil. Was there a significant difference? I don't think so. It pooled well and left the recesses defined and that's what I hoped for. I'd have to do a side by side comparison to determine if I liked one more than the other but I definitely wasn't unhappy with the results. 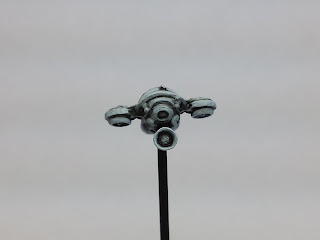 Next I touched up all of raised areas with Fenrisian  Grey to made the details pop. This gives the model greater depth. 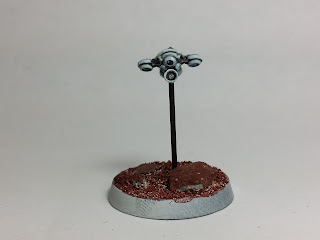 The next stage was a series of detailing tasks. To make the drone pop a bit more all of the sharpest edges were highlighted with GW White Scar. This is done with a sparing amount of paint of the tip of the brush and dragging the edge of the brush around the tops of the hover jets, or the top edge of the speaker attachment. Any strong edge you want to see stand out should get a tiny bit of White Scar. If you are trying to hit piping that doesn't have a sharp edge, just choke up on your brush and treat it like a pencil as you draw a line across that edge.

The lens on the camera was painted during this stage too. I opted for GW Necron Abyss basecoat that was washed with GW Drankenhof Nightshade to make it richer and have more depth. A dot of White Scar was put in the upper left corner to give it a glint of reflective light.

I also put down a layer of GW Rhinox Hide on the top of the base as an adhesive and then dipped the base in sand. The sand will stick to the paint in the same way it does with glue. To keep the sand down I then go back with heavily watered down Rhinox Hide and apply it to the sand. This is the tricky part of this technique. If your paint is too thick, it will pull the sand off of the base and onto your brush. The goal is to have the Rhinox Hide thinned down enough so that it is a droplet at the end of your brush. When the droplet of paint touches the sand it will be drawn off by the sand without the brush ever touching the base. When this watered down paint drys it should look splotchy like in the above photo. 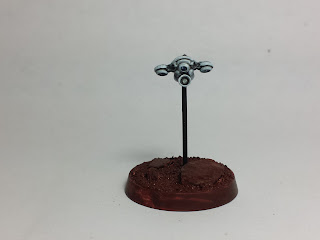 Once the watered down Rhinox Hide is completely dry you will need to paint one or two more coatings of it onto the base. These do not have to be thinned down as heavily. You actually want these coatings to be pigment heavy, so using the standard "milky" consistency that you're supposed to use on the models themselves is appropriate. As you can see by the translucent coverage on the side of the base, the Rhinox Hide will take a few coats to get a nice solid opaque coverage. This will take less coats if you are working over black primer rather than white, like I was. 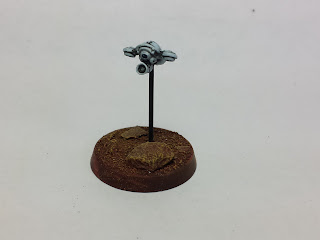 At this point we're just working on finishing up the base. With a nice opaque coverage of Rhinox Hide completely dried, you can then give the whole base a heavy drybrush with GW Tallarn Sand. This will pick up all of those sandy details and give you your first layer of depth. 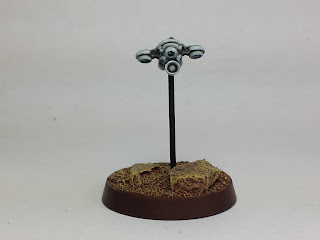 The base can then be completed by doing a final light drybrush of GW Ushabti Bone to increase the sense of depth and variation. To clean up the inevitable dusting of errant drybrushing on the side edges, a couple of thin coats of Rhinox Hide are applied to the edge of the base to get it back to it's opaque best. 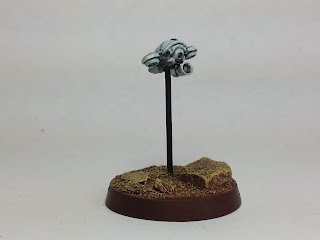 That gives us a completed Speaker Drone, but what about the Arc Discharger on the Surveillance Drone? 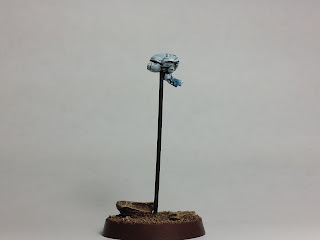 To capture a rudimentary OSL effect on the Arc Discharger I stippled GW Kantor Blue on the tip of the weapon, and then built up the stipple with Kantor Blue mixed with White Scar. It wasn't making me happy honestly, so I washed it with GW Drankenhof Nightshade and when it was dry hit the top edges with the tiniest bit of White Scar for glow. 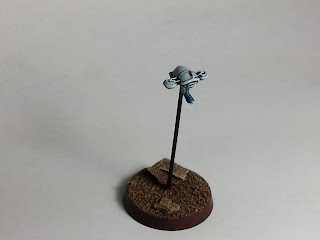 We'll finish up this tutorial with a couple of final pictures from different angles. 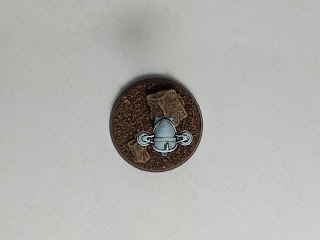 I hope this has given some insight and ideas for painting Drones. We'd love to see your own ideas and accomplishments so please share your photos on the Broken Contract Facebook page or on Instagram with #brokencontract and/or @broken_contract so that we can share your work. 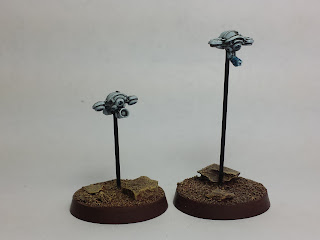 You can pick up a pair of Drones on the Breaker Press Games webstore. Thanks for reading!