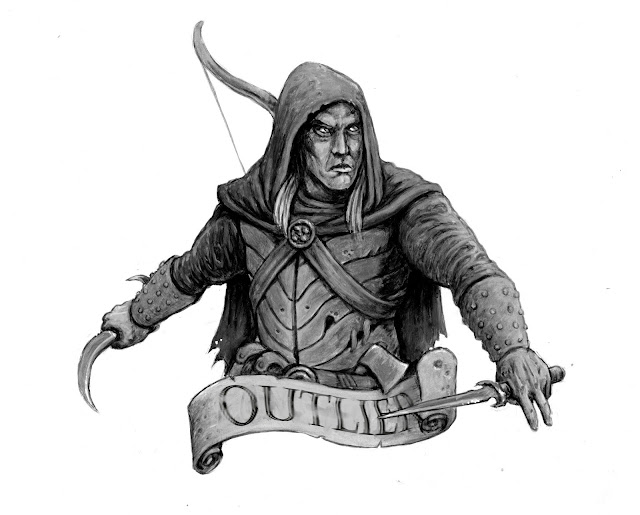 I’m an Outsider, Outside of Everything
Outlier Player Characters in DCC by Nick BaranArt by Nerdgore
The concept of a Player Character with outdoor skills has firm footing in fantasy literature, but not every solitary woodsperson is a benevolent ranger. There is also the survivalist hunter, and the thieving brigand roaming the hills and forests. The Outlier emphasizes the varied motivations and skills of those that live off the land, whether they seek to protect it, or take what they need from it, outside of the governance of “civil” society.

(Editor’s note: The traditional Ranger of AD&D does not fit with the “You’re no hero” philosophy espoused by DCC, but many folks love the wilderness skills associated with the class. In the 80’s, I was in love with the Bandit character class that was featured in Dragon Magazine #63 and Best of Dragon Vol. 4. It was a cool mash up of Thief and Ranger themed skills that I really connected with and had a lot of fun playing. With no official Ranger to tread upon, I’ve elected to fill that slot with what I feel is a truly DCC outdoor survivalist inspired by both the Bandit and Ranger concepts.)

Outliers include any type of outdoor character who’s skill sets are more focused on survival than on swordplay or arcane arts. Outliers rely on their wits and practical knowledge of the natural environment to get by. They are hunters, gatherers, and highway-folk, cunning, crafty, and above all, pragmatic. Lawful Outliers lean toward being rangers and forest keepers, out to preserve the natural balance. They warn their more urban neighbors of incoming threats, possibly prevent poaching, and might gather herbs, lichens, and mushrooms to trade with herbalists and apothecaries in the nearby towns and villages. Neutral Outliers tend to be hunters and woods folk, living off the land with little care for its preservation. They trade in pelts or lumber, but have no desire to participate in society. They observe survival as their prime directive, and seek to do so on their own terms. Chaotic Outliers are bandits and brigands, lurking along the highways and deer tracks looking for the weak and unaware to prey upon. They want the luxuries that civilization produces, but have no desire to engage in the static lives of planted roots and civil discourse. Why labor tirelessly for little reward when you can brandish a dagger or axe, and the cowardly and meek will grovel while handing over their bounty?

Weapon training: Outliers tend to be proficient in weapons that can double as tools or that allow them to travel lightly: blackjack, blowgun, club, dagger, dart, hand axe, javelin, longbow, shortbow, short sword, sling, spear, staff, and wood axe (treat as warhammer for damage and cost). Outliers prefer lighter armor such as padded, leather, studded leather, and hide. Heavier armors tend to be bulk, slow, and noisy - terrible traits for stalking prey, be they poachers, animals, or unwitting travelers. They will occasionally carry a small shield.

Alignment: Outliers have many different motivations and philosophies for why they live off of the land. Each of these impact what survival skills they hone.

Attack modifier / Deed Die: Outliers do not receive a fixed attack modifier at each level. Instead, they receive a random modifier, known as a deed die. At 1st level, this is d3. The Outlier rolls their deed die on each attack roll and applies it to both their attack roll and their damage roll. This deed die functions like the Warrior’s Mighty Deed of Arms but is limited to their Prefered Weapon, which should be chosen at first level from the Weapon Training list above.

Climb sheer surfaces: This ability is identical to the Thieving Skill by the same name.

Sneak Silently: This ability is identical to the Thieving Skill by the same name.

Hide in Shadows: This ability is identical to the Thieving Skill by the same name.

Detect and Follow Tracks (Intelligence): The Outlier can detect or follow the tracks of any ground-based creature that has passed through the area, identify them, and approximate their number. DC10 for familiar terrain, DC15 if the Outlier is not familiar with the terrain, and DC20 if the surface doesn’t generally show tracks, like smooth rock or water.

Natural Awareness (Luck): An Outlier may use their Luck to influence perception and surprise checks.

Set Snares (Intelligence): Outliers are familiar with trapping game, and can be clever and shrewd. A stake attached to a bent branch can be a deadly ploy for anyone, but they excel at these sort of snares and traps. Setting a snare requires a detailed account of the materials used and methodology of how the trap will work. A reasonably sounding trap with proper materials and some concealment is DC 10. If the snare is simple, plausible, and well concealed it could be DC 5. Limited time to set the trap, poor concealment, or unlikely feasibility should be DC 15 - DC 20. Snares and traps can vary wildly and the damage they do are up to the Judge’s discretion..

Herbal Knowledge (Intelligence): Outliers are familiar with their natural environment and know a host of herbal remedies, and on occasion might brew a poison to assist them. They must have 1 oz of herbs on hand to make 1 application, and the application will take D3 Turns to make. An application can be stored for a day before it loses potency. When an Outlier chooses to apply Herbal Knowledge to heal a Character, they must make a DC 11 Check at the time of using the application. If the Check is passed, they will heal 1D3 hit points of damage. If they roll a 1 on the Check, they will do 1D3 hit points of damage instead. Additionally, they can craft minor poisons on a DC 11 Check. The Check to successfully make a poison is rolled at the time of manufacture. If successful, the poison will do 1D3 damage if applied to a weapon, or 2D3 damage if they can get an opponent to ingest it. If they roll a 1 when making the Check to produce the poison they will accidentally poison themselves in the process, taking 1D3 damage. Poisons are dangerous business.


Here is a link to Google Docs for printing purposes.
I'm an Outsider: Outlier Player Characters in DCC
Let me know what you think on Facebook or Instagram:
Breaker Press Facebook
@broken_contract Instagram
Thanks for reading!
-Nick