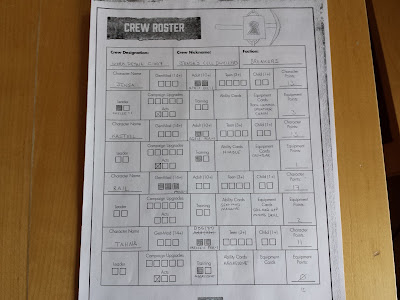 The Crew Roster was a last minute addition to the Broken Contract Rulebook and has no example or explanation, so I'm going to break it down for all of you.

When we sat down to fill out sheets for playtesting the other day, Hal's first question was, "What is Crew Designation?"

Crew Designation: This is the official name of the crew. It should be something completely bland and dehumanizing like, Work Detail C1007. I chose "C" for the C Level of Orin Mine, which is where the action begins in the FerrumSky setting. 1007 would be for the first wave of assigned work details, and 7 being the 7th crew of ~10. In all seriousness, I named this on the fly. The number was actually higher, I thought about how I envisioned C Level as being the newest dig and that it wouldn't have many assigned crews just yet, but a low number like 7 seemed reasonable. Long story short, a random serial number of some sort is fine.

Crew Nickname: This is what your crew get's called. It can be a name granted to them by their friends, enemies, or themselves. Think about how you envision your crew and name them appropriately.

Faction: Currently, this would be Breakers or Black Squadron, but rest assured, more are on the way.

Character Name: I started this sheet out with my leader and crew namesake, Jensa. If names are hard for you, this is a cool sci-fi name generator that Hal used for his characters: Futuristic Name Generator.

Gen-Mod/Adult/Teen/Child: These 4 boxes are for the current 4 types of Character you can create in Broken Contract. Jensa is an Adult, so on this line I am only going to use the Adult box. You'll notice that the box says, "Adult (10+)". This is because Adults start out at 10 points. Adults can start out with up to two upgrades. I chose to use both, so I filled in both check boxes. This shows she is 10+2 = 12 points, so far.

Character Points: This is the total points of the Character type + upgrades. Jensa is 13 points because she was an Adult 10+ 2 (upgrades) +1 Leader upgrade (explained next).

Leader: Any Character can be designated as a Leader and gain an additional upgrade for doing so. That should be tallied here. Why are their two boxes? For room to grow in the FerrumSky Campaign Book.

Campaign Upgrades and Acts: For every Act that a Character participates in they get a tally under Acts. When they've completed 3 Acts, they get an upgrade, and the Act boxes should be erased so that they can start a new tally. A Character can never have more than 5 Campaign Upgrades. Note: A Character that gains an extra upgrade during the Character Creation Process needs to assign it somewhere. For now it should either be tallied here, or under Training. Remember, every Campaign Upgrade increases the Character's points by 1.

Training: This area is currently for Black Squadron Characters that take advantage of the extra Black Squadron Training upgrade for 1 point. Expect to see this area to be used more in the FerrumSky Campaign Book.

Within each of the above areas, I chose to note what upgrades they were as a running list.

Ability Cards: Some upgrades grant Ability Cards and they should all be listed here. These should already be tallied using one of the areas of check boxes so they do not need to be counted again.

Each Crew Roster has slots for 4 Characters, so a normal Crew starting at 100 points will take up multiple Crew Roster pages - typically 2-3.

I encourage you to use the blank space at the top to create a logo for your Crew. Have fun with it.

Thanks for reading and enjoy building your Crews!
-Nick