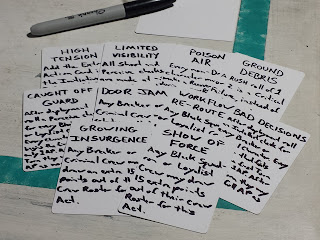 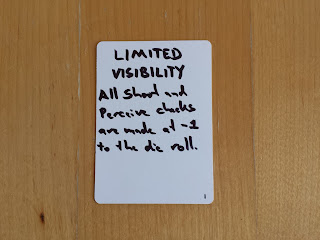 The other day Hal and I played a game where we drew the Limited Visibility Card, which gives -1 to the die roll on all Shoot and Perceive checks. This worked out in my favor because Hal brought along a character with a Shotgun with Bag Shot. The Shotgun has a low rate of fire (you have to Load for 1AP after every firing) so you really have to connect with every shot if you can. Anything that crippled the effectiveness of that gun was a win for me. I still only won the game by 1VP so it didn't dramatically affect the game. It did give us something else to think about while playing though, which is great.

There are a number of different types of Conditions. Some of the Conditions are environmental in nature, like Limited Visibility (harder to Shoot or Search), Ground Debris (risky to Rush), or Poison Air (harder to perform Actions at full capacity). Others are Faction-based escalations or alterations of circumstance like Workflow Re-Route (Black Squadron may add a free barricade), Door Jam (Breakers sabotage a door to keep it open), and the Show of Force/Growing Insurgence Cards which add 15 more points to your Crew Roster for the game. 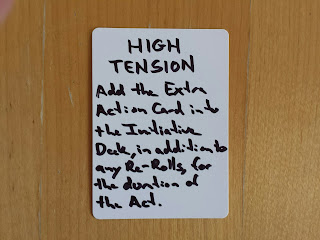 One of the cards I am looking forward to playtesting with others is High Tension. Those of you who own Initiative Decks will know that there is an Extra Action Card in the Deck with no explanation of it's use other than during Character Creation if you've read the rulebook. There will be scenarios that will add it to the Initiative Deck in the future, but it will also make other appearances too, such as on the above card.

These cards will be Poker Card sized, so they are printed in sheets of 18. One of the decisions I will need to make in the coming months is whether to keep the deck to 18 cards or push it to 36. They will probably come in a combined set with the Left for Dead Deck, which will be used for part of the post-game sequence in the FerrumSky Campaign Book. If there are any types of Condition Cards you might like to see, throw those ideas my way! I'm happy to consider them.