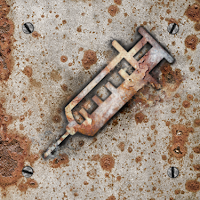 (Editor's Note: People have been asking about Drugs used in the FerrumSky Mines for a while. It just so happens that in February of 2016 I jotted down the names of six different drugs and possible game effects. A year and 1 month later, I've crafted explanations and tweaked the effects of what they do. Let me know what you think. -Nick)

Meeting the daily quotas set by the FerrumSky would be a difficult, if not impossible task, were it not for those willing to upset the delicate chemical balance within their own bodies. Work enhancing drugs are often used by the most fervent Loyalists, but even the average miner might find cause to extend their efficiency for the day for some goal outside themselves. Perhaps they have a child to care for, or a friend on their crew who is injured and they feel the need to compensate for. Of course there are those that just do drugs to dull the pain of their awful daily lives, or to step outside themselves for a little bit. FerrumSky discourages their use because most of the drugs are made illicitly in the mines or they filter in from the food rigs coming from the agri-domes, giving FerrumSky no control over their potency, nor can they profit off of their exchange. Black Squadron are expected to take the drugs away, but the dynamic is much more perverse. It is not unheard of for Black Squadron officers to keep the drugs themselves, using them for their own needs or force feeding them to a worker who isn’t performing their job at peak ability. Drug use is rampant in the mines, but the drugs being taken range from ineffective to downright dangerous. However, the mines are already so dangerous, and work so backbreaking and exhausting, many figure they don’t have much to lose. What follows are some of the most common drugs found in the mines.


Workhorse: Used throughout FerrumSky, and most other industries in the IC, Workhorse is a stimulant that allows the user to work for days without fatigue or need for sleep. Exceedingly popular among FerrumSky Loyalists and those belonging to work cults, Workhorse ensures that the user can work harder and longer than everybody else, often reinforcing their worldview that everyone else around them are lazy whiners. Some Black Squadron Officers keep this drug on hand and force laggers they are overseeing to take it so that quotas can be met without disciplinary action.


Kick: This ammonia inhalant is found throughout the FerrumSky mines to rouse those who fall from exhaustion. It irritates the breathing passages, forcing the person to breathe faster and experience a moment of sudden alertness. It is one of the few accepted drugs used in the mines because though it can be harmful when overused, it is non-addictive.


Dull: This drug compromises the senses and overrides pain, creating a chemical invulnerability. It is popular among miners with nagging injuries that would undermine their ability to work, as well as those dealing with deep depression. With both issues being commonplace in the mines, Dull is a very popular drug. It’s side effect is a slowing of brain function and movement, so it’s use is strongly discouraged by Black Squadron and the FerrumSky Executives above them.


Brain Oil (Foke): Nootropic drugs like Brain Oil heighten focus but slow reaction time. A popular drug amongst technicians and the technically skilled to heighten their work capabilities and compensate for long hours or lack of sleep, Brain Oil is often taken by others for the euphoric side effects, making their job just slightly more tolerable.


Boost: Muscles can be tricked to fire with greater strength, and Boost is used for exactly this purpose. Another drug popular among Loyalists and work cultists, the short term strength increase can make the user more effective at their job. Boost has the side effect of heightened agitation and distorts normal brain activity making the user more violent and confused.


‘Vive: This adrenaline shot is used to restart a body pushed past its capacity. Though this drug can effectively cheat death, the effects are temporary and without medical attention the user will still perish from suffering additional harm or simply when they wear off. 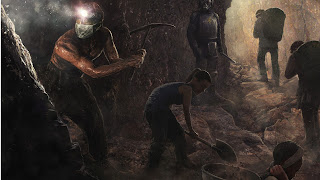 Proposed Game Effects (Note: These have not been tested. Hence, Proposed. - Nick):

Workhorse: This Drug gives the using Character +1 Action per Turn for the duration of the Episode. Additionally, Brain Stats (Psyche, Perceive, Intellect, Dealing, Leadership) suffer a -1 modifier to all Checks.


Kick: This Drug will give a Down Character a +2 to their next Recovery Check when used.


Dull: The using Character may ignore a single Wound per Turn for the duration of the Act. If a single Action would cause multiple Wounds, the Character still only ignores 1. Dull slows the Character by 1 AP per Turn.


Brain Oil: The using Character is considered Focused for the duration of the Act or until the Character is Down, Out, Critical, or Shocked. Additionally, all Agility Checks are made with a -2 modifier to the roll.


Boost: The using Character receives +1 modifier to all Strength Checks for the duration of the Act. Additionally, Brain Stats (Psyche, Perceive, Intellect, Dealing, Leadership) suffer a -1 modifier to all Checks.


At the end of every Act where Drugs have been used, make a separate Recovery Check for the Drug Using Character. If the Check is Successful, the Character fully recovers from the Drug, even if it should continue for the duration of the Episode.