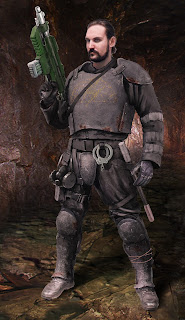 Ash Walker is collaboration between myself, Kickstarter Backer: Adam Walck, editor Robert Ferrick, and artist Filip Dudek.  This Character was created as part of the "Welcome to 2303AD!" Pledge level and will be getting a model in the near future. I am humbled that Adam thought this project was cool enough that he wanted to become an actual part of it. -Nick

When Ash Walker contracted with Black Squadron Security he was hoping for work that offered a level of excitement and freedom. It was only by chance that he was accepted into their security program. He was in peak physical condition, demonstrated a sense of leadership and authority in his aptitude and psychological testing, and he knew all the right jargon to test well, masking his strong sense of individualism.

Hathor is not Officer Walker’s first assignment, and Orin Settlement is not his first posting on Hathor. He has proven to be a thorn in the side of every security crew he’s been assigned to. Defiantly resistant to being branded, Ash refuses to be owned. He’s been repeatedly written up and fined for not wearing his Black Squadron arm band and for scratching out the FerrumSky logo from his armor. His coworkers feel he undermines their authority by allowing his charges to call him Ash during meal time, where he can often be seen laughing and joking with the work crews he oversees. On more than one occasion he has been given a direct order and said, “No”, because it conflicted with his sense of justice. These transgressions of discipline have earned him very little favor among his peers who take company loyalty and strict hierarchy very seriously. The only reason Officer Walker hasn’t been stripped of his contract is that he’s proven extremely effective in other ways. His familiarity with the work crews and their lives has made him an effective diffuser when tensions rise. Unfortunately, in contracting for an organization steeped in hierarchy, blatantly ignoring that structure is no way to earn allies. Instead, irritated overseers and administrators have consistently reassign him to make him someone else’s problem.

Ash’s time at Orin Settlement has been short and his most recent performance evaluation already cited numerous complaints from his fellow Prods. His affinity for the iron miners has once again drawn the ire of his team and the frustrated scorn of his overseer. Despite his compelling outer confidence, he has a growing sense that Orin Settlement could be the end of the line for his security contract, and that he is running the risk of having his contract sold to an even more confining line of work. In his head he has entertained the same notions of finding freedom out in the Bonelands between settlements that many of the miners do. However, his individualism has left him without coalition. He is regarded with a degree of mistrust by worker and officer alike. Still, like his charges he has breaking on his mind.