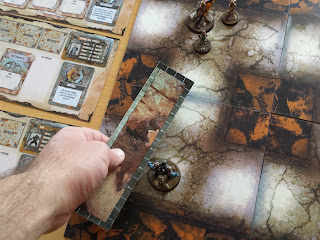 This is the first Act (scenario) designed for "matched play" games of Broken Contract. It's random set up is meant to make the Act endlessly replayable. Though Broken Contract was designed for narrative play, this scenario will allow for pick up games, or a great "mid episode" game as Characters move from Act 1 to Act 3 of an Episode of your own crafting. Give it a try and let us know what you think! -Nick

The Mission: The Breakers have established one or more viable escape routes and are making a press toward their exit. Black Squadron Security or Loyalists must try to stop their attempt to break through. 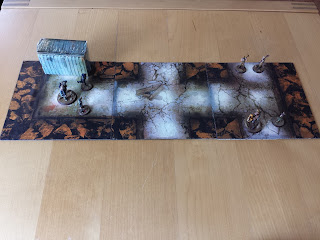 Example Set-Up #1: Rolled one Exit Point, three tiles, and one Hydraulic Door. The Alarm would be placed somewhere on the middle tile. 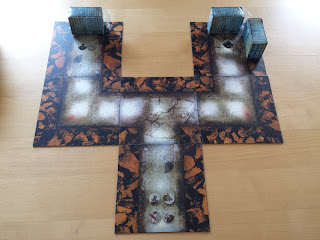 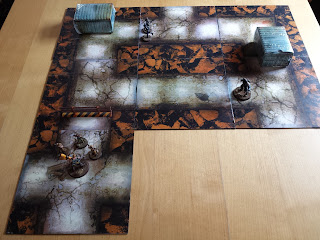 Example Set-Up#3: Rolled two Exit Points, seven tiles, two Storage Containers, and one Barricade. The Alarm would be placed on the tile with the Barricade.

Storage Container: Storage Containers are always placed along a wall so that they do not block through-traffic. There should be a 1.5” path around the Storage Container so that it narrows the route but does not block it. Storage Containers may be climbed and stood on top of. Containers may also be entered by Lock Breaking. Lock Breaking is 1AP and requires a successful Strength Check. It takes 1AP to enter or exit the Container. A Character may also Search a Container for 1AP. A successful Perceive check will result in potentially spotting something useful. Roll a D6 if successful: 1 Lose an Additional Action, 2-3 Nothing of Value, 4 Shovel, 5 Sledgehammer or Big Wrench, 6 Pickaxe or Rock Hammer, 7 Oversized Rock Saw or Mining Drill, 8 Choose any 1 item from the Equipment Deck.

Barricade: Barricades may be 2” or 4” long and may be placed at least 1” from any tile edge, including exit points. Barricades are 1” tall obstacles that must be Jumped or Climbed. A Jump of 1” will not clear the Barricade and the jumping Character will stop at the point where they intended to cross. Walking and Climbing are separate Actions so it will take an Action to get to the Barricade and a second Action to Climb over it.

Hydraulic Door: Hydraulic doors may be placed across any 4” passage that is not on the Breaker start tile. A Key Pad token must be placed on an adjacent wall within 2” of the Door. Doors may be Opened or Closed at the Key Pad token by a standing Character with a Key Card (1AP) with automatic success, or by Crack the Code (1AP) which requires an Intellect Check at -1 to the roll, with a success activating the door.

Exit Points: If any part of the base of a model crosses the over the edge of an Exit Point they are considered to be Escaped! And are removed from the board.

Sound Alarm (1AP): When a Character is in base contact with the Alarm token the Character can spend 1 AP to sound the alarm and cause any open hydraulic doors to emergency release and close in an instant. After the button is hit the door immediately drops with a crash. If any part of the base of a model is on the hazard stripes when the door seals the model takes a Strength 3 hit doing D6 Wounds. This does not require a Key Card but will alert the control room of the mining facility that there is a problem in this sector.

Act Length: The Act lasts 8 turns. If at the end of any Recovery Phase all of the Breakers are Restrained, Shocked, Down, Out, Critical, Dead or have left an Exit Point the Act ends and the game is over.


The Black Squadron officers or Loyalists earn 1 point for each Breaker Restrained at the end of the game, either in Restraints or Grappled. They also earn 1 point for Sounding the Alarm. They lose 1 point for every Character they leave Critical or Dead on the Breaker side.

Here it is in PDF form: Escape Route PDF