I have a lot of friends doing a lot of cool stuff. One of those friends has a project that is currently on Kickstarter. It is called Ruin & Conquest and it is a system-agnostic campaign setting for whatever fantasy RPG you love. Brinton Williams has thrown his heart and soul into this tome and has gathered a whole host of top notch analog artists to bring his vision to gritty black ink on white paper. Go over to Kickstarter and check it out. The funding push will end on Friday October 26th, so don't sleep on it. Also, it looks like his Facebook group could use a boost too, so if you're on Facebook go Like Ruin & Conquest there.


I've never met Jason at Thunderchild Miniatures, but we both ran our first Kickstarters simultaneously a few years back and I have been following his work ever since. He is dedicated to his craft, that is for sure. His next Kickstarter launches this weekend, on Saturday October 20th. This time around he is releasing a miniature board game called, Goregasm Arena. Looks like toxic mutants in bloody arena combat. Like all of his stuff, I am sure it is completely over the top. Check it out if that's your thing, and support!


A few days before Ruin & Conquest is wrapping up on Kickstarter, Chris Kohler from Slow Death Games will be launching his new line of black metal gang miniatures for his game of subcultural warfare, Wild in the Streets. If you've followed Breaker Press for a while you probably know that we released a zine-style gaming supplement for Wild in the Streets called, Tooth Chipper, so you know we're fans. Anyway, these new models are full of character and add a fun additional gang to the game. 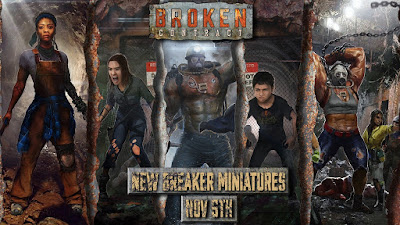 We've been talking about it for a year now, and it is finally happening. We have a range of new Breaker miniatures almost ready to go and on November 5th we intend to launch a short and sweet Kickstarter to get them manufactured. This has been an ongoing project to update the range, add additional character types, and increase the diversity of the range. I think the sculptors have done a great job of bringing these characters to life and I look forward to getting them out into the world. 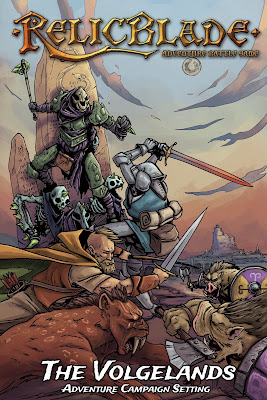 Finally, Sean Sutter at Metal King Studio is running a Kickstarter for his latest RelicBlade release, The Volgelands Adventure Campaign Setting. Sean, like Jason from Thunderchild Miniatures, does all of the art and sculpting himself, in addition to the game design. He's got a dedicated community who are going to be frothing for this release, I'm sure of it.

It looks like all of the indie game designers I know all decided the autumn/winter was the time to make their next big move, so there are a lot of options to support. Luckily, most of these are smaller projects so it should be possible to spread your hobby dollars around and support some exceptionally talent folks with a lot of cool games and miniatures.