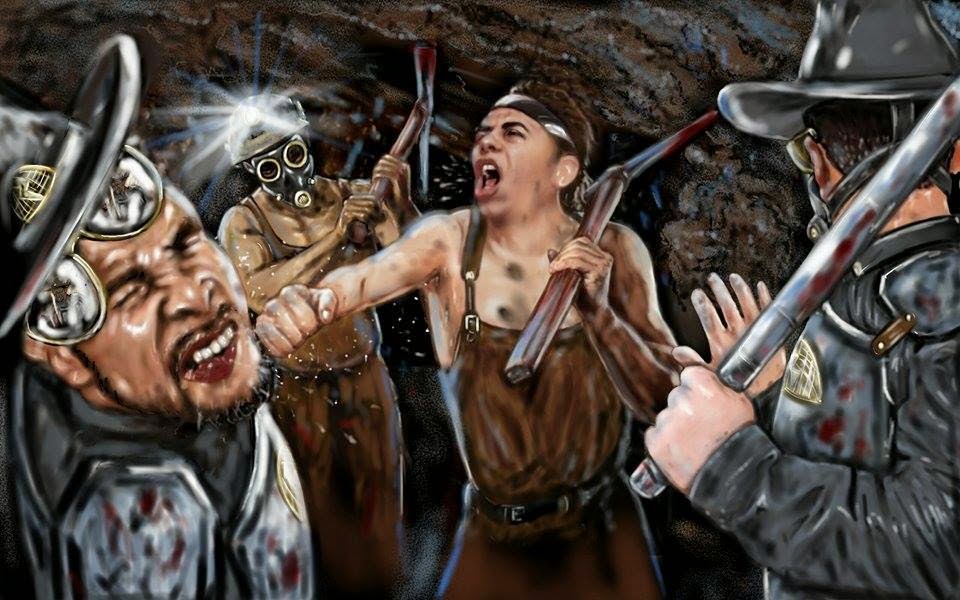 Over the last few weeks I've allowed two worlds to collide. My two greatest loves have long been tabletop gaming and punk music. As far back as 3rd grade when I was introduced to Dungeons & Dragons by my older cousins, I've wanted to be involved in the gaming industry. In the late 80's though, I discovered hardcore punk and eventually started playing in bands and running my own record label as a hobby. My two loves vied for my attention as I juggled touring and putting out records with working in game stores and making time to game. At various points one would dominate over the other largely because my two loves rarely intermingle. For me both loves are sort of all encompassing as they are such time intensive interests.


One of the large draws for me to move to Chicago 8 years ago was that my friend Anton Zaleski, then known for Underestimated Records and the punk band Get It Away (and now known for Hyacinth Games/Wreck-Age), had gathered a large friendship circle of gaming punks. It was a weird world where band practices and pushing 30mm soldiers across the table top or settling Catan did not conflict. It was a wondrous couple of years, but eventually balance was lost and everyone spun off into immersion in punk or gaming respectively putting me back into a compartmentalized life.

Having invested over 20 years of my life into punk music, I've made the acquaintance of numerous talented musicians and artists. Oliver Zavala, Colin Swanson-White, and Samuel Alcarez are all people I have met as punk connections. Additionally, two of my first play testers for Broken Contract were Chuck Hickey and Monkey Ramirez, who are also people I have met through music. In fact, a lot of concepts interwoven in the storyline of the game are drawn from looking at the world through the lens of punk which is often angry music about the struggle for freedom against oppression or authority. Ultimately, Broken Contract is just a different medium for me to express many of the same concepts I do through music, but that's not the only way that the two overlap.


If you've been following the blog then you have already seen the Security Officer art drawn off of play tester and musician Chuck Hickey. This bit of art garnered a lot of attention from my friends, so I asked my friend Nick Tape from the band Coke Bust if he'd like to be featured in the game. He gave an enthusiastic yes. Now one of the advantages of utilizing my punk friends as models for concept art is that they are often already captured in moments of high adrenaline action at punk shows. This is made even easier with the abundance of talented punk photographers like Angela Owens who document the punk scene. When I made the decision to try and capture one of those high energy moments of Nick Tape I did a search via google images and came across this photo taken by Angela. As soon as I saw it I could envision Nick smashing his way through Security Officers instead of the crowd, while carrying a shovel instead of a microphone.


I passed the image and idea onto Geng Gendall and he came back with this image:


This art not only captured all of the energy of Angela's photo, but it focused the rage into a hated foe instead of a frantic crowd. Adding to the details, Geng used the Chuck-Hickey-as-Security-Officer sketch to create a realistic target for Nick's flying fist. He drew off of all of the concept art that came before to add other details like the FeSky (FerrumSky Corporation - in this case the faceless masters) logo on all of their gear and the reflection of another approaching Security Officer in Chuck's dislodged sunglasses. The only seeming flaw, was the gun in Nick Tape's hand. The gun is very dramatic and adds to the sense of revolutionary violence, but at the same time the setting would make the gun a very unlikely object to have. All of the Security Officer weapons are designed to shock or stun to keep the workers alive. Killing your workers is no way to make quotas. I mentioned this to Geng and he graciously obliged by altering the gun to a pick axe in a manner of hours. Here is version 2 of the art:


Pretty soon my worlds will be colliding even further. I've started talking to a 3D sculptor about taking things to the next stage of development - turning images like these (of Chuck and Nick) into 30mm resin models like you would see in games like Zombicide and the soon to be released, Aetherium. This means the time for crowd funding is approaching rapidly. I will be hoping that both communities come together to help fund the further development of Broken Contract so please keep following this blog or Facebook/Twitter for updates. Thanks for reading!