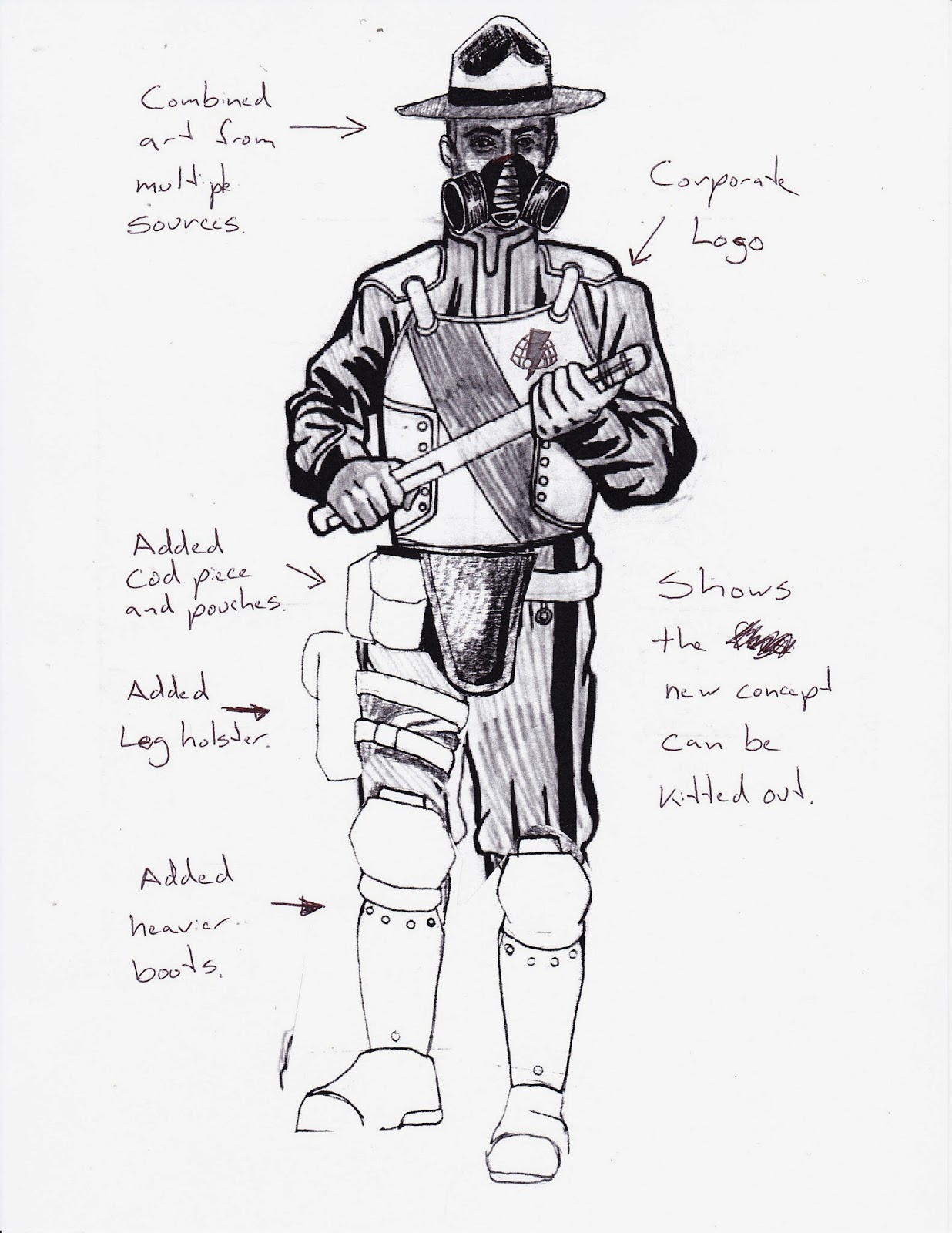 We're still working to define the look of the Security Officers in Broken Contract. Sam has come up with a variety of looks and we're trying to nail down the one that both defines them and makes them interesting for others to eventually paint figures of and play in the game. I happened to notice that Sam has been using consistent posing while we've worked on the look, so I came up with the idea of making paper dolls of his art so that I could combine elements and find what works together. Standing in FedEx Office I printed out his art and then broke out the scissors and got cutting.and pasting. 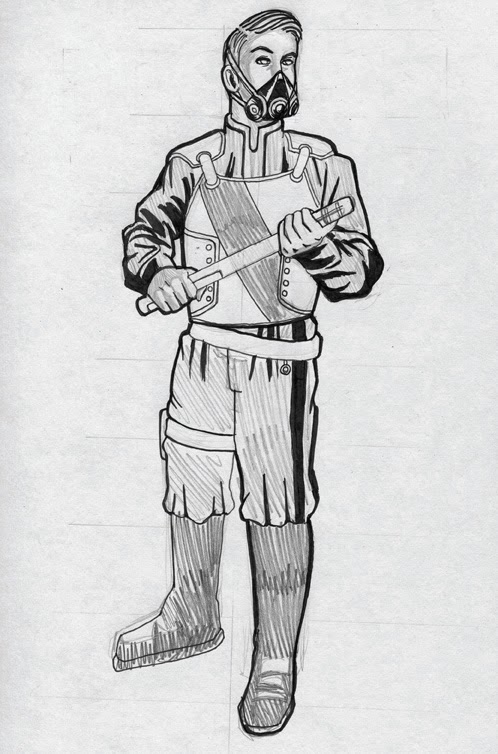 This was a new piece of art Sam provided to me after the last blog post. The goal was to define a much more fascist looking Security Officer. He looks like a loyal boot boy for sure with his high boots, high collar, fitted uniform, and clean cut hair. I was concerned he didn't look rugged enough though, with the horrible working conditions and disparity. Also, the diagonal stripe made me think of the Ottoman Empire soldiers or something. He looks like a hard ass, but was he the right kind of hard ass? 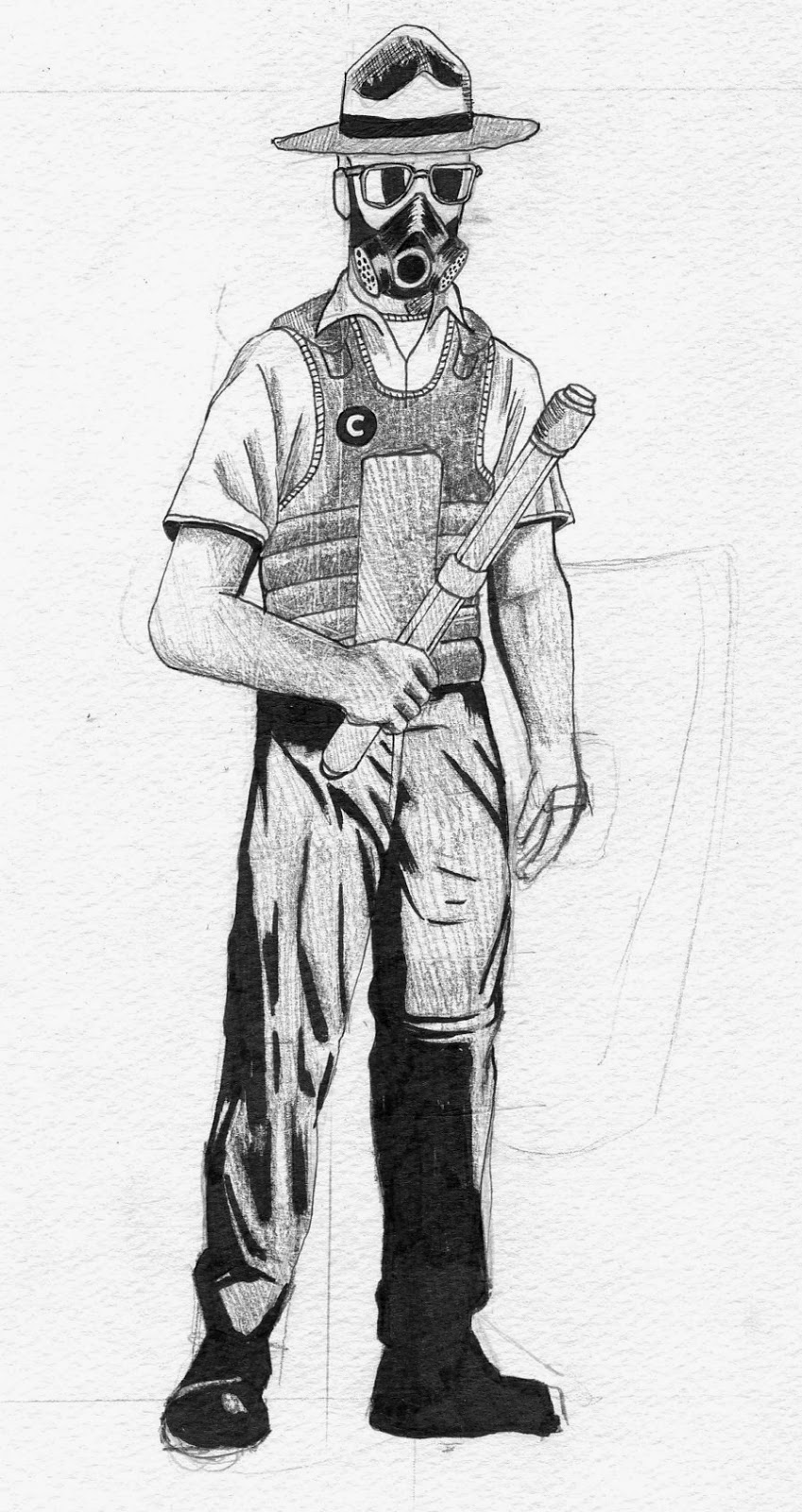 I still loved the look of this guy with his very minimal gear, but with a latent air of intimidation with his 'State Trooper' style hat and sunglasses. Of course, my first order of business would be to see how this head would look on the 'boot boy' body. 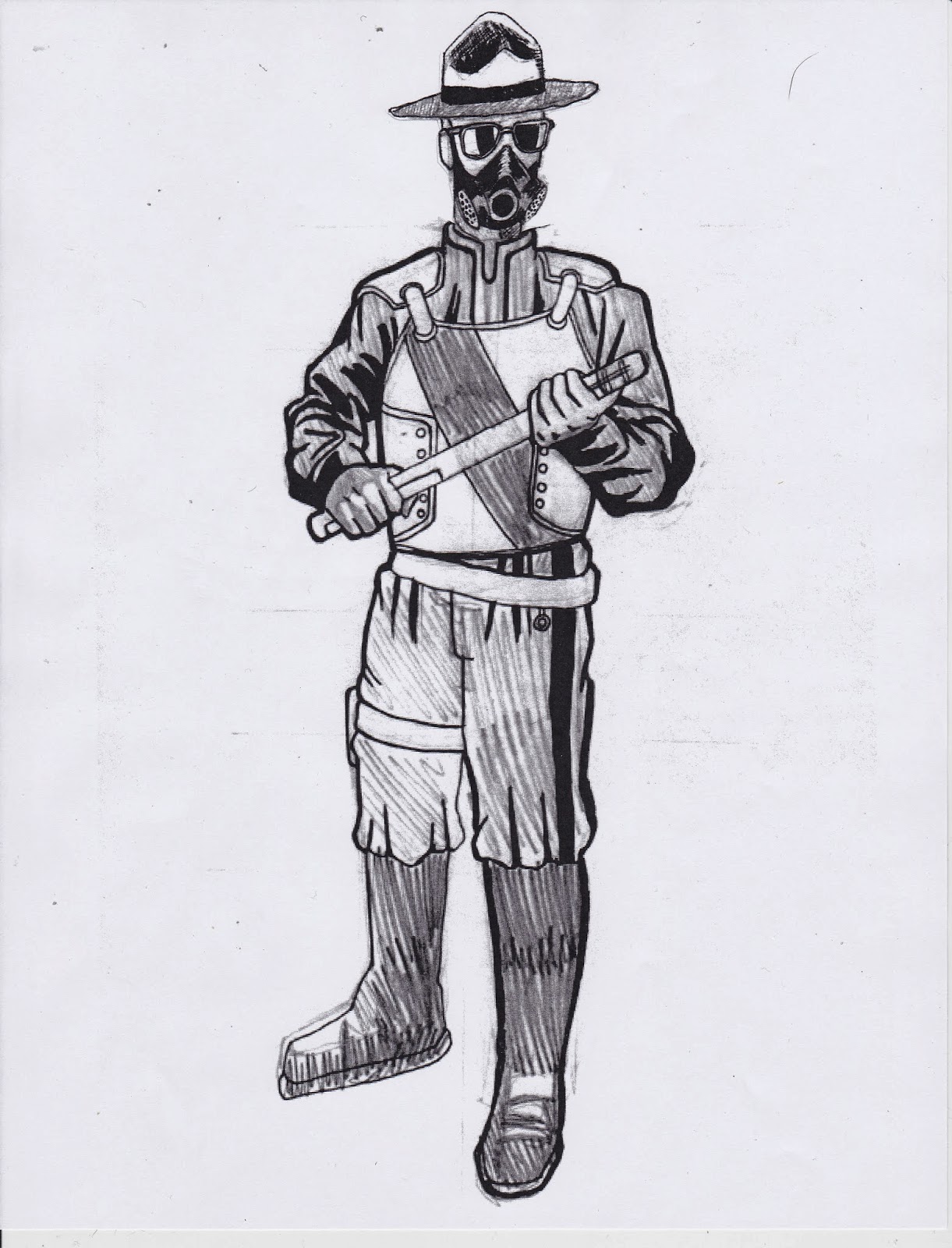 Here's the end result. He looks like a real jerky Canadian Mountie. This combo made me like the fascist garb a lot more. But some of the Security Officers are going to be more tooled up. So I looked to this piece of art, scissors in hand.

This concept has a very "traditional" look and is a bit more gear heavy which adds some visual interest. The trick is, these poorly paid Security Officers would not be consistently gear heavy. As friends pointed out, he looks like he's ready for action, but something about him says lieutenant or administrator, like he normally spends more time behind a desk than suppressing insurrection in the mines. 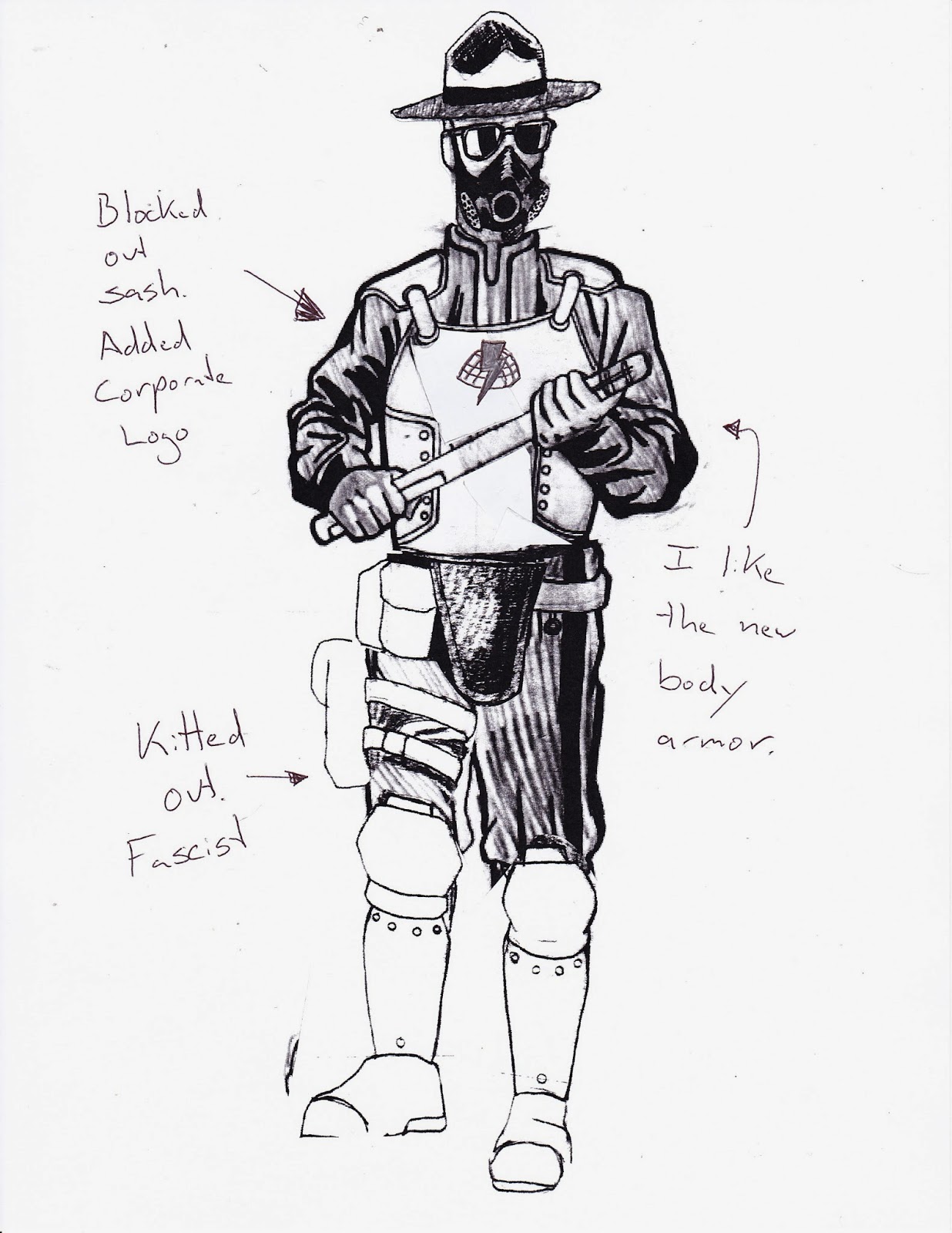 I used the mirror image function on the copier to reverse the leg armor and then cut out the cod piece, pouches, and reinforced leg protection. I also removed the diagonal stripe and replaced it with an oppressive looking corporate logo. I think this image captures the overall look we want - the pin striped uniform pants, the high collar shirt, the Trooper hat, the body armor, the corporate logo, and some kit. This truly looks like a Security Officer that mixes sci-fi and western elements. I think we have a keeper. However, I like the idea of disparity even within the Security Officers. Disparity is a form of control as those with some power will struggle to maintain that power, even if it means distancing themselves from those beneath them. 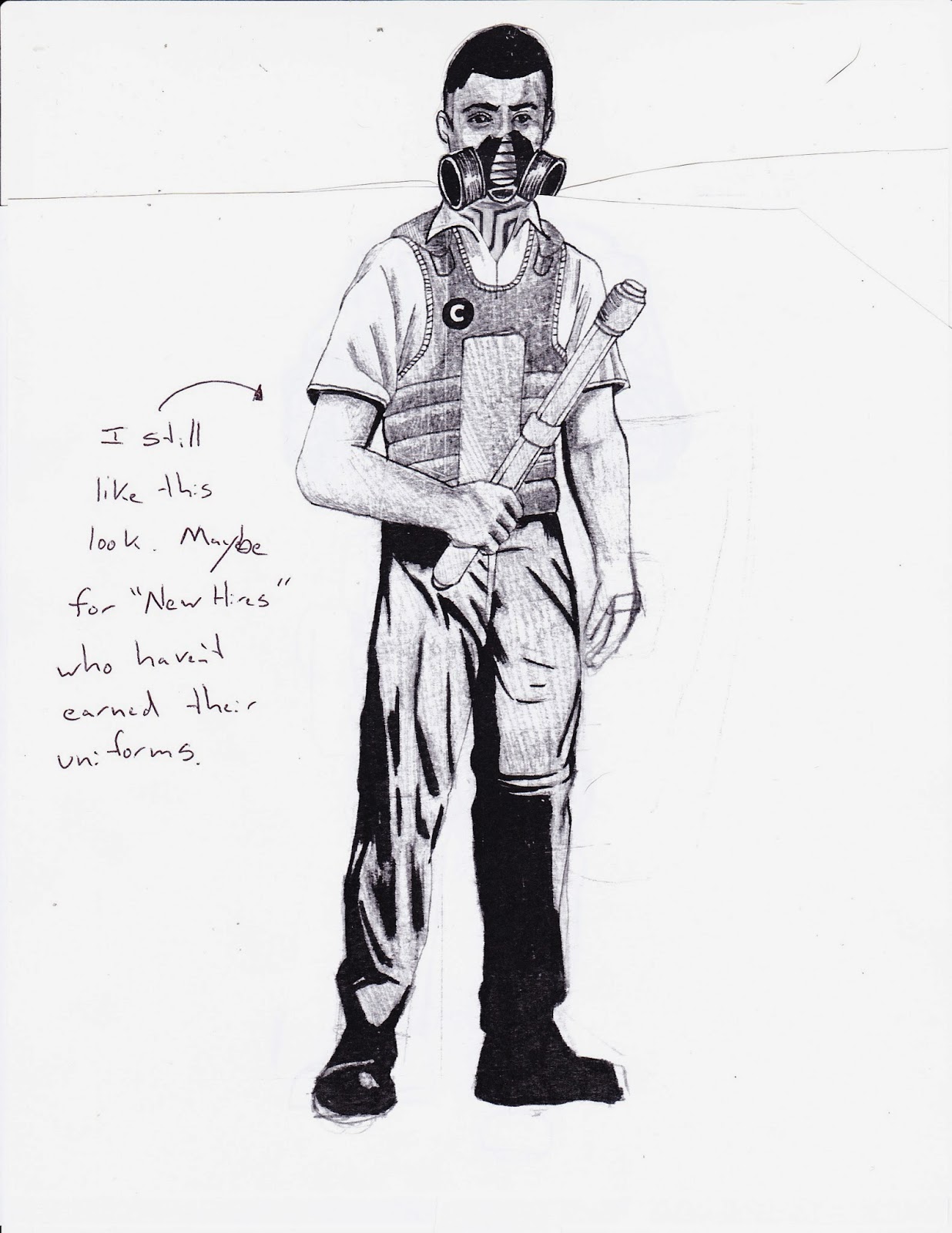 When I worked for GW new hires were to wear the SCOUT name tag for the first few weeks they worked for the company. This was to avoid buying a name tag for someone who might quit a couple days after they got hired. After a week or two, then we could order their official name tag. I imagine new Security Officers being given the same sort of treatment. You get a cheap vest, a baton, and a mask, and if you don't get killed in the first few months, then you earn your access to uniform and gear, which are of course taken from your pay.

This was a really fun exercise and I'm really happy with the results that I got. Thanks to Will Blood, Nick Powell, Matt Sears, Ken Aponte, and Josh Raymond for their input on the designs. They acted as a focus group of sorts and I greatly appreciate them taking a moment to comment. And of course, thanks to Sam Alcarez for taking the time to produce the awesome art.