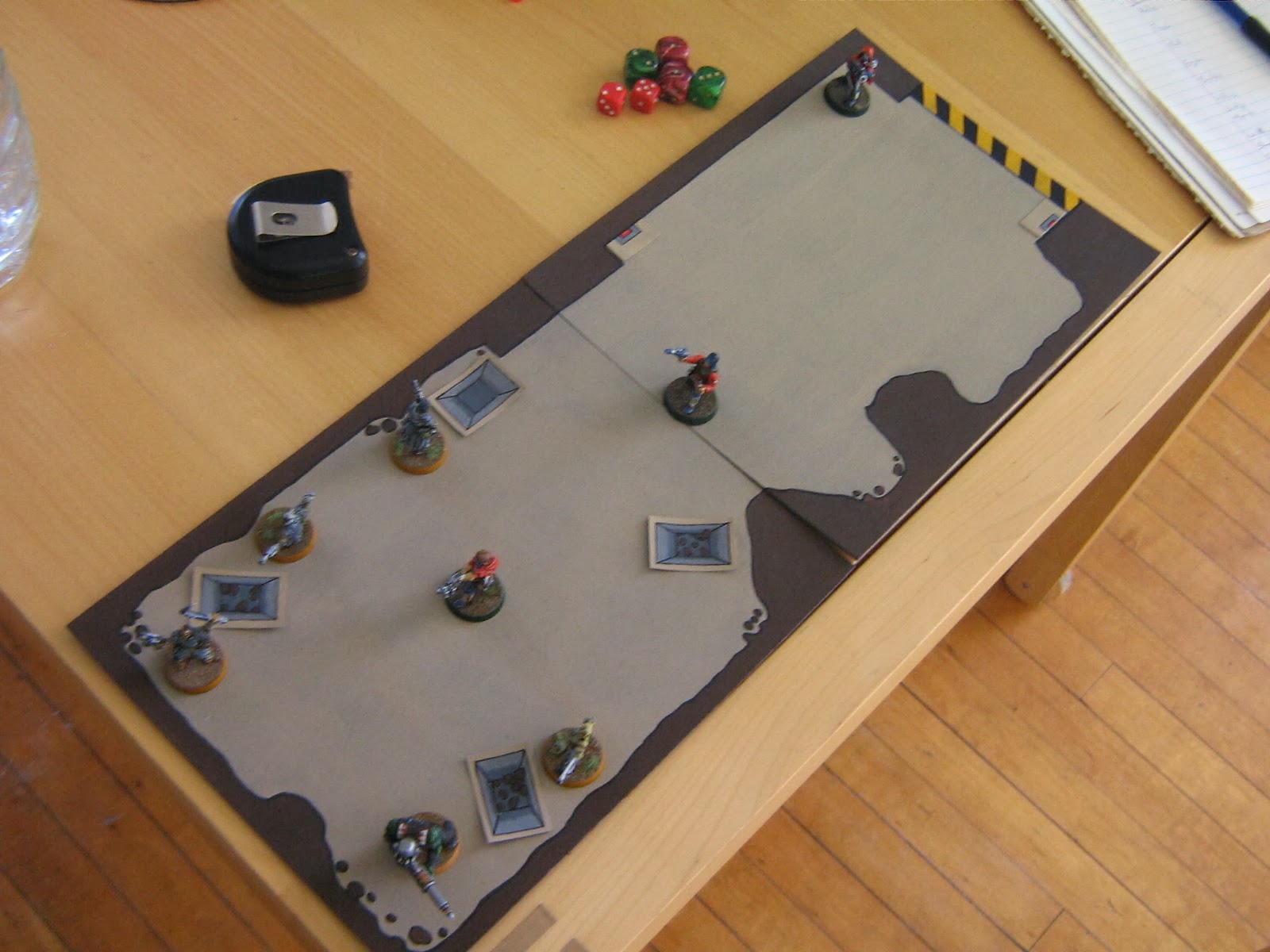 “Open revolt. One of the miners in your crew, Trest, has overtaken one of the guards. You had discussed this. You planned for this. The moment is upon you and all those plans are blurred by fear and adrenaline. It’s time to act. A Security Officer moves past you with his shock baton charging towards Trest, demanding that Trest stand down. You step forward and swing your shovel, connecting with the Security Officer’s head. You instinctively anticipate gunfire from the Gunner’s position and drop to the ground to take protection behind a bin and plan your next move.”

There is a large variety of Actions available to simulate an exciting and cinematic experience. There are Move Actions so you can do everything from Walk, Crawl, Jump, Go Prone, Stand Up, and even Dive Roll. There are Combat Actions like Shoot, Throw a Grenade, Attack, Grapple, Push, and Throw. And then there are Utility Actions, those seemingly mundane Actions that really come in handy like Carry a Comrade, Clear Gun Jam, Apply First Aid, Apply Restraints, Open Door, and *"Stand Down!" This huge variety of Actions (which is not an all inclusive list) allows Characters to behave like they would in an RPG or first person shooter video game. It allows you to really feel like you are involved in the action, without everything being an abstraction.

Interruptions are performed outside of the Turn Sequence and are immediate reactions to Actions of opposing Characters. Most Interruptions are defensive actions like Parrying, Dodging, and Defending. Interruptions may only be performed if you have Actions remaining. For example, on the next Turn Overseer Billins does a Dive Roll (1 Action Point) to get behind an ore bin and then makes a Check to Shoot his pistol at Ned Forsythe (1 Action Point) and misses. Ned has a pick axe in his hand and Overseer Billins is pretty sure Ned is going to Jump over the bin and Attack him so he ends his turn with 1 Action Point remaining. As expected Ned Forsythe Jumps over the bin and makes a successful Check to land upright. Then Ned wants to make a Check to Attack Overseer Billins with the Pick Axe so Overseer Billins player has to decide which Interruption he might take. He has it narrowed down to Dodge or Fire! . His Shooting is better than his Agility so he decides to make a Check to Fire! at Ned as he Attacks (1 Action Point). If he’s lucky he’ll take down Ned before he even takes a swing at him.

Like Actions, there is a list of options that includes ones you'd expect, and others that you wouldn't. Defend, Dodge, Fire!, Flee, Go Prone, Parry, *Beg For Mercy, and the very vague sounding *Strength of Will all make an appearance allowing you to do what you envision your Character doing.

How It Plays Out

Each Character actively on the board has their own Initiative each turn that they draw for. There are no simultaneous Actions in Broken Contract. These means that each Turn there will be a constant switching back and forth between players as they perform Actions or are Interrupted. Sometimes you will find yourself in a position where saving your Action Points to use for Interruptions is the best thing you can do. Other times you will want to seize the moment to its fullest. The important thing is that everyone playing are almost always engaged.

That's it for today. Here are explanations to some unexplained head scratchers from above.
-Nick

* "Stand Down!" What's that? Characters can use their authority to get their opposing Characters to stop what they are doing by wasting their Action Points or even causing them to drop their weapon.

* Beg For Mercy. Who would ever do that? Like "Stand Down!" its an attempt to convince an Attacker that you will come along quietly and thus, halt their Attack. There is nothing  to stop you from immediately going back on your offer when the opponent's guard is down.

* Strength of Will. This Interruption allows you to make a Check to break out of initiative order and perform an Action as an Interruption.