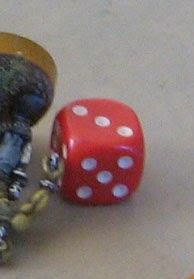 “We all size each other up. We look everyone up and down. Work crews, Security Forces, Contract Enforcers, and Steaders – we’re all the same. We ask ourselves who’d have the strength or skill to back us up or take us down in a fight. We know who we’d want to do the talking for us when negotiating our way out of trouble, and we know who’d have the clear head and medical knowledge to patch us up when we get hurt. I know I’ve come to respect the guy who watches everybody’s movement, and their subtle changes in behavior. And someone might look like they are weak, socially inept, or dumb as rocks – but if they have the fervor of belief burning in their heart, they can be your greatest threat. Knowing what a person is capable of is just as useful to our survival as any other skills we may possess.”

There are many approaches a game designer can take to Stats. You can keep a game simple with only a very basic mechanic for movement, like one or two squares/spaces, and a rudimentary mechanic for attacking, like in Checkers. And then you can scale it up in complexity to something a little more complex like Chess, Risk, and Zombicide. Of course, you can continue upward in complexity to games like Necromunda/Warhammer 40K, and finally to role-playing games like Pathfinder, D&D, and Warhammer Fantasy Role-Play.

There is no right and wrong way to define how a game is played. Deciding whether you want all of the pieces in the game to be equal in ability, or whether you want every piece uniquely defined is up to the designer and as we know all of the above games are considered "fun" games.

In Broken Contract I want all of the characters to be unique in both subtle and dramatic ways and I want to have the flexibility in place to define them even further as the game evolves. The simpler a Stat line is, the harder it becomes to define the Characters and allow them to grow without dramatically impacting the game. Think about Checkers and how dramatically the game changes when you king one of your Checkers. Also, think about how in Checkers, once you king a Checker, there really is nowhere to go from there.

So in Broken Contract I wanted to create a robust Stat line with a lot of different Stats to be able to subtly define the differences between the Characters. This was exceptionally important since I wanted the game to stick to a very simple D6 system where almost every Action was carried out with the roll of a single D6. To that end I created this list of categories and Stats:

Core Stats are numbers that no Checks are made against. Each normal human Character gets to perform 3 Actions per Turn. Their Walk Move is 3"/squares per Turn. And they may sustain 3 Wounds before they are defined as Down (0 Wounds remaining), Out of Action (-1 Wounds. Ouch!), or Seriously Injured (-2 Wounds or worse. Near death.)

The remaining 12 Stats are all Stats that through the course of the game you will roll a D6 to Check against. The higher the Stat, the harder it becomes to be successful. So a normal human has a Shoot: 5, which means that before modifiers, if they want to Shoot a gun at another Character, they need a 5 or 6 to hit. Similarly, a comrade is Down and you run your Character over to try and help them. You Check against your Medic: 5 and roll a 3. You have failed, and your comrade continues to bleed out. You'll notice then, that looking at this Stat line, it seems pretty hard for a normal human to do anything as all the Stats are either 5 or 6. But as soon as you give a Character a single Combat or Brain Stat of 4 they suddenly are way more effective at what they can do. They clearly become defined as being good in that particular field. With that in mind I gave the Stat line a broad range of Stats so that a Character that was good at Melee, wasn't also defined as being strong and agile at the same time. Instead, you can have a good Agility to show your reaction time and balance are superior to your opponent's, but if you don't know how to fight it can only carry you so far.

Also, by allowing everyone to have the Medic skill, it shows that everyone has a rudimentary knowledge of how to patch a wound. They might even know how to perform CPR or tie a tourniquet. But, a Character with a Medic: 4 probably has some legitimate medical training and as a result, do the right thing successfully 50% of the time even without the right tools for the job - they are savvy enough to be able to improvise on the fly because they know what they are doing.

By going this route, you can theoretically have 12 clearly specialized Characters with only a single point of deviation on one of their Stats; they clearly become marked as exceptional in that area. Give a Character a single point of deviation in 2 of their Stats and now you have seemingly limitless ways of defining each Character's strengths and weaknesses. Toss in a fairly basic list of Skills and suddenly you have a exponential increase in the ways you can differentiate between the abilities of different characters without branching off into D8's, D10's, percentile dice, or dice pools. You can still do everything on a single D6 roll for just about everything. That's the path I have taken with Broken Contract, and I'm pretty happy with how its playing out.